Aspect Theatre’s follow-up to the excellent Duet for One is this play by Patrick Marber from 2003, which is based on Strindberg’s 1888 drama.  The action is transposed to an English country house in 1945, when post-war Britain is heady from the landslide victory of the Labour Party (aka ‘the good old days’!)  Rather than join her father in London, Miss Julie stays at home to party with the servants.  She has designs in particular on John, her father’s chauffeur, who is loosely engaged to Christine, the cook.  The scene is set for a triangular battle of wills.

Katherine Parker-Jones is excellent as the eponymous Julie, giving a complex characterisation.  Here is Julie’s fragility and haughtiness, her vulnerability and pain, her self-loathing and her imperiousness – all at the mercy of her baser desires.  She is both predator and prey.

As the object of Julie’s attentions, John Lines makes chauffeur John a man torn between duty and desire, between propriety and possibility.   He is tantalised by the prospect of a new life in New York, liberated from the rigidity of the class system, all the while despising what Julie represents and yet desiring her as a woman.  This pair are messed up, I’m telling you!

By contrast, Lizzie Crow as Christine the plain-speaking cook, knows her mind and her place and has a more pragmatic approach.  Crow’s silences speak volumes – it’s a compelling performance – and when she lets rip, it is to take the moral high ground (albeit somewhat hypocritically).

Director Marc Dugmore establishes and maintains an intimately naturalistic feel – a good fit for the snug space at the Attic, and Patrick Marber’s writing touches on the symbolism that is indicative of the material’s Scandinavian origins.  The fate of a pet bird, for example, represents the deflowering of Miss Julie.

The long table that dominates Katherine Parker-Jones’s set design represents the class system: it is used properly by the servants, but Julie breaks conventions and sits on it, even serves herself up on it at one point.  There is a lot to unpack here, raising the stakes beyond that of a three-handed domestic spat.

It’s a gripping 75 minutes of top-quality drama that asks us to examine that which we perhaps cannot escape or avoid: our place in the class system and our own animalistic nature.

A splendid production that manages to be both classy and sordid at the same time! 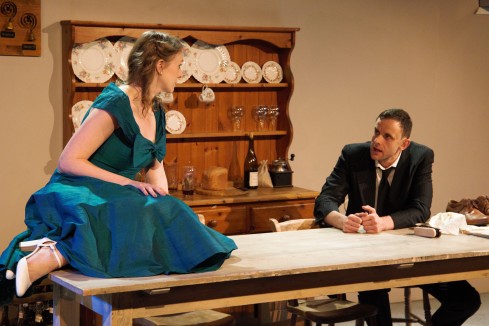 The Attic Theatre, Stratford upon Avon, Friday 17th May, 2019

Brand-new company, Aspect Theatre is doing the rounds with their production of Tom Kempinski’s acclaimed piece about a concert violinist who consults a psychiatrist when she is stricken with multiple sclerosis and is forced to change her life in all manner of ways.  What could be timelier in Mental Health Awareness Week?  The play consists of six scenes, each a different session.  He, Dr Feldmann, is constant and unchanging; she, Stephanie Abrahams, runs the gamut from bitterness, anger, sarcasm, resentment…

It’s a showcase for both actors.  As Stephanie, Katherine Parker-Jones gives us the arrogance and the sneering sarcasm, and yet somehow manages to evince our sympathies for this rarefied creature, when the defensive facades fall away, and we are allowed to see the human being brought low by this debilitating disease.  Parker-Jones delivers lengthy monologues with truth and conviction, and while we laugh at her barbed remarks, we are ultimately moved by her predicament.  Martin Bourne gives his Feldmann a gentle cadence rather than a strong Cherman accent, and the portrayal is all the better for it.  He has to do a lot of listening-acting, maintaining professional detachment – when he finally flips his lid and puts Stephanie in her place, it may be a shock tactic on the psychiatrist’s behalf, but it’s an electrifying moment, to be sure.

The peril of this piece is that with one character confined to a wheelchair and the other taking notes behind his clipboard, proceedings can become too static.  Director Marc W Dugmore avoids this problem in the close confines of the Attic Theatre, where it feels like we are in the consulting room alongside the characters.  The intimacy means Dugmore can bring out the contrasts between the characters and between the sessions with subtlety and with broader moves, as the piece’s mood swings between comedy and tragedy.  I’m not a fan, though, of the slow fade to spotlight whenever Stephanie launches into her longer speeches; I want to see Feldmann’s impassive expression and perhaps some betrayal of a reaction. 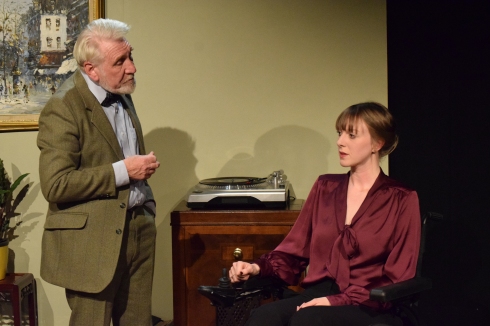