A Good Night With Mister Tom

David Wood’s adaptation of Michelle Magorian’s classic children’s novel is a spell-binding piece of theatre that tugs at the heartstrings without descending into mawkish sentimentality.  Director Angus Jackson tells the tale naturalistically but in a stylised setting.  Scenery is sparse – for the Dorset scenes, there is little more than a raised platform with the odd doorway and items of furniture –this platform also serves as the stage for the amdram productions the children enjoy.  For the London scenes in the second half, the platform lifts up to become the oppressive dinginess of the slum home little Willy shares with his religious crackpot mother.  The action flows from place to place as easy as turning pages in a storybook.

The plot concerns the evacuation of children to the countryside just before the outbreak of the Second World War, back in the days when strangers were trusted as a matter of course with nary a whiff of a CRB check.  And so, weedy urchin William (Arthur Gledhill-Franks) is placed with grizzled old curmudgeon Mister Tom (Oliver Ford Davies) and a relationship develops between the two that, through the course of the action, heals the wounds they both suffered before they met.  The boy has livid bruises from his mother’s belt.  The old man has been a recluse for decades since his wife died giving birth to a son that also didn’t survive.

It’s a very touching story and an utterly charming production.  This reviewer confesses to having to wipe his eyes several times throughout the evening.  The ensemble, doubling on adult and child roles in places (in a Blue Remembered Hills kind of way) keep the action going, creating atmosphere and character quickly and economically.  A standout is Joseph Holgate as theatrical extrovert Zach who helps bring Will out of his shell, and also Aoife McMahon as the villain of the piece (not counting the offstage Hitler, of course) who berates and beats her ‘Willy’ in the guise of religious correction.  She is a Catherine Tate monster, an East End version of the mother in Carrie but a tragic figure nevertheless.

Oliver Ford Davies’s Tom Oakley is a likeable old grump, even-tempered and guarded.  His thaw is glacial, and his matter-of-factness is all the more touching.  As William, Arthur Gledhill Franks is almost unbearably vulnerable.  His growth into a confident and affectionate member of the community, after some of the most horrific abuse imaginable, is a delight to behold.

There is a real danger that the puppets might upstage the actors.  Beautiful birds, a twitchy squirrel and above all, a wonderful Border Collie, add to the storybook feel but they are also played absolutely straight.   You soon forget operator Elisa de Grey’s continual presence behind Sammy the dog and instantly fall in love with the animal itself.  Somehow the balance is maintained and the puppets enhance the performance rather than stealing the show.  My hat is off to puppet master Toby Olié for his wonderful creations.

This is a perfect piece of theatre for all the family.  Nothing is sugar-coated but somehow it manages to be very sweet indeed. 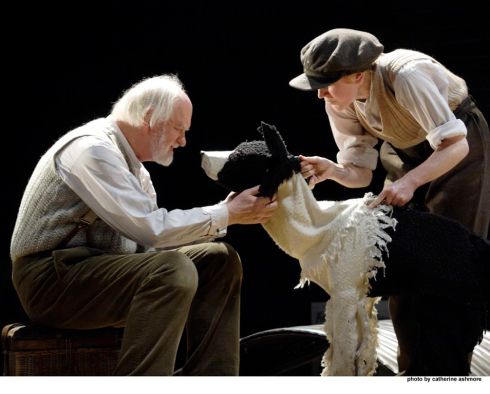