David Essex used to be a dish.  Now he’s washing them in the REP’s new production of Morris Panych’s hit play, set in the washing-up room deep in the bowels of a swish restaurant.

Into Essex’s domain comes new boy Emmett (Nik Makaram, late of Emmerdale) who used to enjoy the posh nosh and the good life himself.  Emmett is scornful of his new boss’s meditations and resents and rejects his reduced circumstances as a lowly dishwasher.  Dressler (Essex) is having none of it.  For him dishwashing is duty, job satisfaction and purpose.  He is prone to flights of philosophical musing – The play is not a slice-of-life but a means through which we reflect on our own lives, places in society and the nature of the human condition.   The naturalism of the dialogue is distorted by lyrical passages.  Dressler refers to glasses as ‘translucent chalices’ at one point – just one example of when the writing gets a bit pretentious.

Also working in the kitchen is ‘lifer’ Moss (Andrew Jarvis) a decrepit old man marked for death and the chop.  He clings to life as long as he still has his job and is prone to random and demented outbursts as he loses yet another marble.  It reminds me of the Beckett play except these guys aren’t so much as Waiting for Godot as washing-up for him.

David Essex is commanding as washer-upper-in-chief Dressler, a character I find ultimately to be repugnant with his grandiloquence and small ambition.  Nik Makarem is strong as the new boy whose learning curve turns out to be a full circle but for me the most compelling performance comes from Andrew Jarvis as raddled old Moss.

Director Nikolai Foster handles the play’s rich vein of dark humour well (there’s lots to make you laugh or smile wryly) but in the end it’s a dispiriting experience.  “All there is: work, death; the rest is a detour,” opines Dressler.  Trying to effect change in this unjust society is futile.

Excellently performed and presented though it may be (Matthew Wright’s detailed set is stunning) The Dishwashers parades lots of ideas but lacks the scale and scope of another play it reminded me of, Arnold Wesker’s The Kitchen.  It feels at times like there’s too much on its plate. 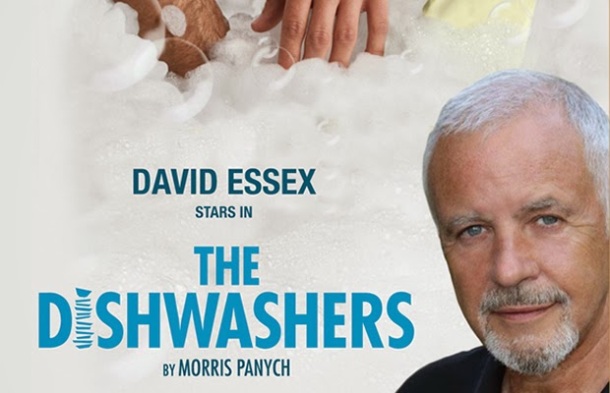