Edmond Rostand’s grand play is here presented in the Crescent’s Ron Barber Studio in this scaled-down adaptation by Glyn Maxwell. Even so, it’s an ambitious project: the Crescent is never shy of a challenge. A chorus of nuns form the chorus of minor characters in support of the protagonists. Some of them cope better than others with the heightened language and some have real stage presence: Angela Daniels, for example, as a lusty servant and as a Captain in the army! Les Stringer brings dignity as Le Bret and Alan Bull’s Ragueneau the cake-shop proprietor adds a touching quality: the experience of these two enriches the mostly young company.

Andrew Elkington is the dashing but goofy and gauche Christian de Neuvillette, unable to articulate his love for Roxane, until the eponymous Cyrano steps in to write epistles of love on the younger, better-looking man’s behalf. Cyrano loves Roxane too and so the letters are infused with his heartfelt but unspoken passion. As the big-nosed Cyrano, the excellent James David Knapp drives the piece with vigour and verve but he needs to be matched, in the comic moments, with equal energy. Director Alan K Marshall needs to make the comic business as sharp and quick-fire as Cyrano’s wit. The early scenes plod along at a steady pace, and the humour is ponderously dealt with – to its detriment.

When things take a more dramatic turn, the production comes into its own. An elegant Roxane, Hannah Kelly brings sensitivity as well as humour to the role, while Andrew Elkington’s Christian discovers fire in his belly in a satisfying performance. I warm to Nicholas Shelton’s De Guiche – he gets better as the play goes on. By the end, this stripped-down piece has the power to move. The dramatic climax is handled very well indeed.

Pat Brown and Vera Dean have gone all out for the costumes. In the absence of any set they evoke the period. Indeed, rails of costumes form the entrances and exits of the scenes, while dozens of frocks are suspended from the ceiling. This abundance of period clothing makes it all the more baffling why Cyrano himself is dressed like a modern-day supply teacher throughout. Like his nose, his costume sets him apart from the rest – not necessarily in a good way.

There is atmospheric lighting courtesy of Chris Briggs. Everyone is working so hard, you will them to succeed – and they make a good fist of it.

On the whole, this is an enjoyable production. It just needs to tighten up on the comic business to match the high quality of the emotional moments. 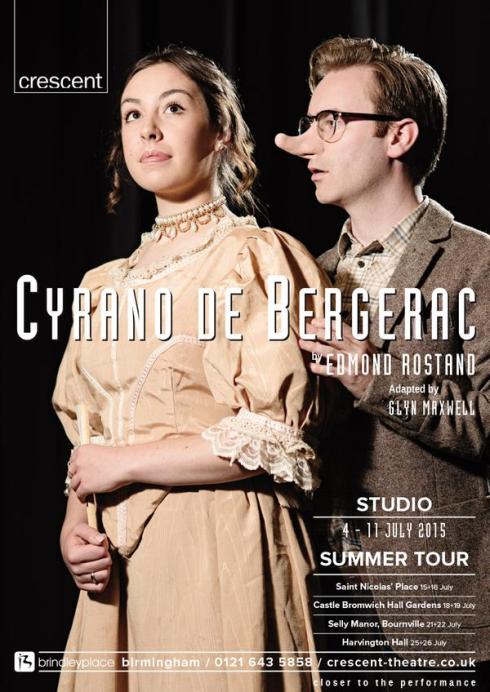 Every One’s a Winner

Patrick Marber’s award-winning comedy is resurrected in the Ron Barber Studio by a talented all-male cast under the astute direction of Andrew Smith.  Set in a restaurant, the action involves the anticipation of a weekly poker school before, in the third act, the poker school itself takes place.

Marber’s script is very funny and allows the actors to build credible and rounded characterisations. There is Mark Grady as rough-and-ready cook Sweeney, anxious to keep some money aside to spend on his daughter; Frankie (James David Knapp) dreams of travelling to Las Vegas and hitting the big time on the tables; joker in the pack Mugsy (an excellent Mark Payne) seeks funding for his own restaurant, a public toilet conversion that doesn’t sound very palatable; and boss man Stephen the restaurateur (Dave Hill).  Added to this bunch is Stephen’s troubled son, gambling addict Carl (Andrew Elkington) and the quietly menacing Ash (Phil Rea) to whom Carl owes several grand.

Andrew Smith keeps the banter tearing along, managing crescendos and silences like a maestro.  Some of the rapid-fire cross-cutting between kitchen and restaurant needs a little bit of tightening but this was only the second performance of the run so I expect that will be sorted – This is a slick, well-oiled production with something of the atmosphere of Mojo currently in the West End and, yes, something of the high quality of that show too.

Hill and Elkington have the most emotional moments as father and son, negotiating their relationship over sums of cash borrowed or given.  Hill is rather touching in his portrayal, playing his cards close to his chest, you might say.  Elkington too is very strong in his selfish outbursts.  Grady and Knapp provide comedy and pathos – we see how far these men are steeped in their gambling pursuits, and Rea, the ostensible villain of the piece, does a nice line in understated as well as unequivocal threat.  But for me the energy of the performance stems mainly from Mark Payne’s characterisation of the hapless dreamer Mugsy.  We take delight and have pity in his ups and downs.  It’s a detailed and effective study in comic playing. Sonia Chopra’s set is flexible in its economy – the stairs painted like playing cards are a nice touch – and nothing gets in the way of the cast,

Cards on the table time: if you’re looking for a couple of hours’ worth of excellent, enjoyable drama, Dealer’s Choice is very much a safe bet. 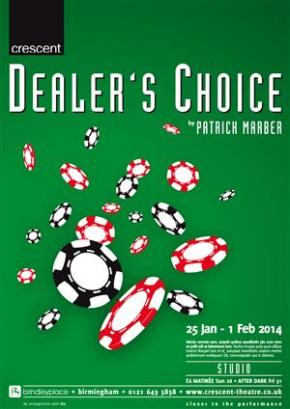