The iconic British film was based on the novel Jack’s Return Home by Ted Lewis.  This production by Northern Stage returns to that source material but keeps the film’s title – for publicity reasons, I imagine.

Adapted by Torben Betts, this is a story of revenge.  Jack Carter, old school gangster, returns to his North-East home for his brother’s funeral.  While there, he investigates what happened and determines to make those who put Frank in a box pay.  He winkles out the bad guys and lets them have it.  That’s about the size of it.  It’s almost Jacobean, almost Greek tragedy – Jack’s lust for vengeance brings about his own destruction.

As the anti-hero, Kevin Wathen is utterly convincing, delivering the script’s more lyrical, beat-poetic passages as well as the harsh, four-letter dialogue, with menace and aggression.

In fact, this is the most sweary script you will hear outside of Berkoff.  If a word doesn’t begin with F, it begins with C, in a relentless barrage of hard language.  It establishes the milieu as a rough, tough world and, at times, it’s also funny.  Like being hit over the head with a Viz magazine.

Ever-present is Jack’s dead brother, Frank (Martin Douglas) – someone for our narrator to talk to, rather than addressing us directly.  We are very much in Carter’s mind.  Douglas is also a mean drummer, underscoring the action in a way that brings to mind recent film Birdman – as well as evoking the jazz of the period.

Amy Cameron is excellent as Jack’s orphaned niece Doreen – able to give as good as she gets verbally, but also vulnerable and afraid.  Victoria Elliott is also good as tart-with-no-heart Margaret and female gangster Glenda – unrecognisable in a change of wig.  It is Michael Hodgson’s characterisations that distinguish his mob boss Kinnear and Irish heavy Con.  This latter has a terrifying scene with young Doreen – the play is very much a slow-burner but moments of tension arise and are expertly handled by director Lorne Campbell.

I also liked Donald McBride’s comically sweary toff, Brumby, and the set (by 59 Productions Limited) evokes brutalised post-war Britain: a landscape of mounds of broken red bricks, viewed through the arch of a viaduct or railway bridge.  It is over this rubble that the characters pick their way, striving to be king of the tip.

It’s an uncomfortable watch and far from a good advertisement for humanity, and it runs a little longer than perhaps it needs to.  I wouldn’t say I enjoyed it as such, but it’s so stylish and well-executed (loved the shadows!), I can’t help but admire the production values and the performances.

Get Carter assaults the ears and leaves a nasty taste – a brutal tale of brutal folk in a brutal place. 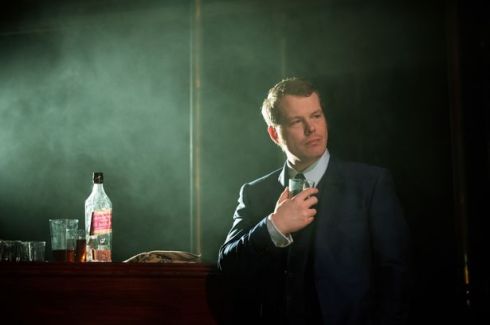