Martin McDonagh’s 2003 play is given a fresh revival in this Bear Pit production directed with great care by Steve Farr.  One of the first things I notice is the gender-swapping of a couple of characters, and this is more than a nod to equal opportunities or the prevailing fashion in contemporary theatre.  Farr chooses to make female the play’s most violent characters: a brutal police officer and a mentally stunted killer, thereby bringing a new dynamic to key scenes.  It works brilliantly.  And so, Hannah McBride’s tough-talking, volatile Ariel can be mock-seductive in her interrogation of the suspect Katurian, and the scene drips with menace; and there is something more sinister about Emma Beasley’s childlike Michaela and her homicidal re-enactments of her brother’s macabre short stories.  It is these stories that have brought the writer Katurian to the attention of the police because of the similarities between the gruesome narratives and a recent spate of child murders…

The action unfolds in the interrogation room of the police headquarters in a totalitarian state, somewhere vaguely Eastern European maybe… Farr creates tense atmosphere on an almost bare stage by eliciting compelling performances from his superlative cast, wringing just as much menace and tension from the silences between outbursts as from the outbursts themselves.  As with other works by McDonagh, the language is strong, the humour a deep shade of black, and the subject matter exceedingly dark.  We laugh to relieve the horrors McDonagh makes us contemplate, and Farr, wisely, works on our imaginations rather than overusing schlocky stage effects.

Equally as strong as the women in the cast are the blokes.  Graham Tyrer is pitch perfect as Detective Tupolski, the putative ‘good cop’ while Alexander Simkin shines as troubled writer Katurian, blending fear with indignation, vulnerability with inner strength.  Special mention must be made of Annabel Peet’s onscreen appearance as ‘Little Jesus’ in a pre-recorded visualisation of one of Katurian’s twisted tales.

It’s gripping stuff, intriguing and hilarious, a dark mystery with absurdist elements.  It’s about stories and storytelling, the stories we tell to protect ourselves, to protect our loved ones, the stories that carry our understanding of an often senseless world.  The explicit horrors within Katurian’s tales are matched by the implicit horrors of the unnamed totalitarian state, where the police have powers to bypass the judicial system.  Also, this production contains some of the most disturbing noises off this reviewer has ever heard.

It’s yet another top-quality production at the Bear Pit, following the great success of The Cripple of Inishmaan back in March.  Perhaps McDonagh should be sponsoring these endeavours! 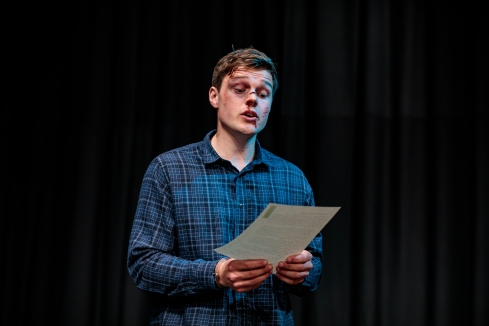