The Hippodrome’s pantomime is invariably the biggest and boldest and this year marks the triumphant return of John Barrowman to the theatre after an absence of eight years.  And it was certainly worth the wait.  Barrowman is the consummate entertainer, singing, dancing, joking, working the crowd, all with his trademark boundless energy and enthusiasm.  Star quality is written all over him – and with such a big star, the production values rise to meet him.  From start to finish, the extravagant staging, with many a Wow moment, impresses your socks off, including the now-obligatory 3D sequence.

It begins with EastEnders’ Steve McFadden as King Rat – we quickly learn even he is not the biggest rat in London.  McFadden clearly enjoys himself playing the villain and he handles King Rat’s doggerel verse with aplomb.  He also shows himself to be a good sport, as straight man to Idle Jack’s mockery.  Idle Jack is played by Hippodrome panto favourite Matt Slack (he’s already booked to play Buttons next year!) and the warm welcome he receives when he first appears almost takes the roof off.   Slack is a talented clown and mimic, relentlessly funny and highly skilled.

Andrew Ryan returns to play the dame, Sarah the Cook, delivering the goods – I feel he could be given more – a slapstick or ‘slosh’ scene, which is the only sixpence missing from this Christmas pudding.

Much laughter is to be had because of veteran double-act the Krankies, whose humour and routines slot right into the panto format.  The act still works and their adlibs are sharp and hilarious.  It’s only disturbing if you think about it…

Jodie Prenger makes a sprightly Fairy Bow Bells – her voice blending sweetly with Barrowman’s for a duet.  Danielle Hope is a charming Alice and Kage Douglas’s good-looking Sultan is a pleasant surprise.  Taofique Folarin’s Brummie Cat is also a treat – again, I would like to see him being given more to do.

The cast is supported by a tireless company of dancers (choreographed by Alan Harding) and a hard-working band under the baton of Robert Willis.  Ben Cracknell’s lighting enhances the special effects (courtesy of The Twins FX) while remaining in keeping with traditional panto conventions.

There’s more of an adult tinge to the humour than other shows in the region, making this a panto that caters to all tastes.  All in all, this Dick is a breath-taking spectacle to make you laugh-out-loud and ooh and aah.  Once again, the Hippodrome pulls out all the stops and provides a highlight of the season. 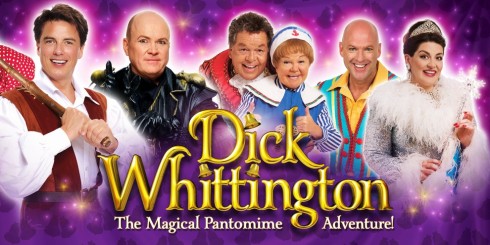