Lady and the Tram

The Secret Theatre Company’s  new production of the Tennessee Williams classic is startling in its approach.  The stage is stripped bare, with only white walls, strip lighting and a stepladder as scenic elements – there is also a poor man’s TARDIS: a cubicle with a shower curtain that is wheeled on to represent the bathroom.  There is no attempt to convey any sense of the Deep South in terms of setting or even accent and so mentions of place names jar, as though New Orleans is a London borough you’ve never heard of.  Not only is the play robbed of its sultry, steamy qualities, many of its passions are also misdirected.

A minimalist approach could work very well but I think director Sean Holmes overdoes it with the alienation effects.  By the interval, the starkness and the blaring music had given me a stonking headache.

That said, there are some powerful and striking moments of theatricality, many of them from Nadia Albina as Blanche – but we are not allowed to become emotionally involved with any of the characters, kept at a distance as we are.  Sergo Vares’s Stanley is not meaty enough; Adelle Leonce’s Stella veers from the engaging to the chillingly deadpan; and Steven Webb has a lovely moment as a young man with whom Blanche flirts.

By the final act, I think I’ve cottoned on.  Blanche’s mental state has deteriorated so much it strikes me we have been in her head all along.  it’s all nightmarish because that’s how she experiences the world.. Sort of.  Maybe.  Perhaps.  I don’t know.

This Streetcar is bold and brash but doesn’t quite reach its destination.  It is not so much reliant on the kindness of strangers as on a kind of strangeness. 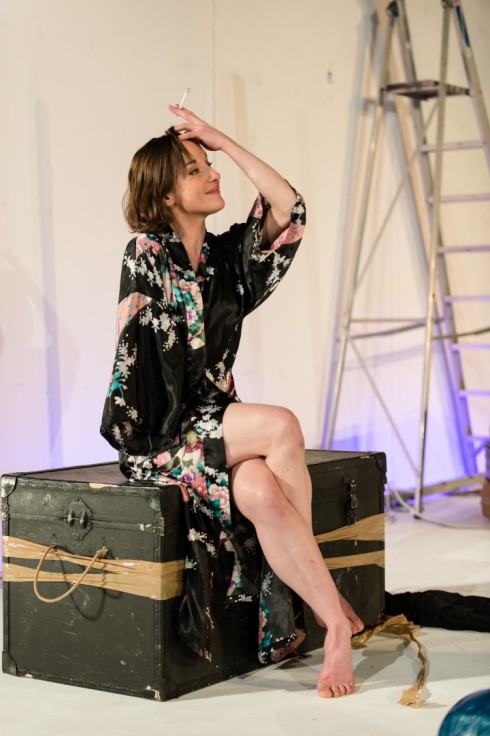 On the case: Nadia Albina as Blanche