JACK AND THE BEANSTALK

Apart from a couple of changes, the main cast from last year’s rollicking Aladdin returns to Wolverhampton for this generous bean feast of fun, and they seem to work more as a team this time.  Lisa Riley is in the good fairy role, as Mother Nature, glamorous yet down-to-earth – in fact, despite the lofty heights of the beanstalk, this is a very down-to-earth show!  Ian Adams is Dame Trot in an array of gorgeously over-the-top outfits.  Adams is an excellent dame, whose mannerisms never descend into caricature or lampoon.  He is supported by Adam C Booth as Simple Simon, an energised funny man who can work the audience seemingly effortlessly.  Local star Doreen Tipton is also back to augment the comic capers, bringing local jokes for local people – the Black Country dialect is instantly funny, and Doreen’s deadpan presence is a hoot.

Graham Cole is enjoying himself as the giant’s henchman, Fleshcreep – he even has a go at singing to open the second act.  Bless.

But leading man and star of the show is Gareth Gates, looking rugged and sounding smooth.  His pop star vocals are as sweet as ever, and he treats us to a rendition of Unchained Melody that gives me shivers.  He looks great in panto costume and handles the action well, leaving the broad comedy to the others.  His voice blends well with Sarah Vaughan’s Jill, and a traditional routine on a wall with interference from Simple Simon offers one of this funny shows funniest moments.  There is a chaotic version of The 12 Days of Christmas, complete with water pistols, and a delightful moment with youngsters brought up from the audience.

Everything you expect to see is here, well presented and pleasingly performed, from the troupe of dancers and the chorus of kids, to the corny jokes and some hilarious bawdy humour.  When the giant finally puts in an appearance, it is an impressive piece of large-scale puppetry, and there is the added bonus of a cameo from Julie Paton, singing gorgeously as his golden harp.  Paton also choreographs and so is responsible for a lot of the show’s pizzazz.

Production values are high and the fun levels higher.  This is a solid and reliable pantomime that delivers on all fronts.  Hugely enjoyable and full of good cheer, this production demonstrates why I think pantomime is the best thing about the festive season. 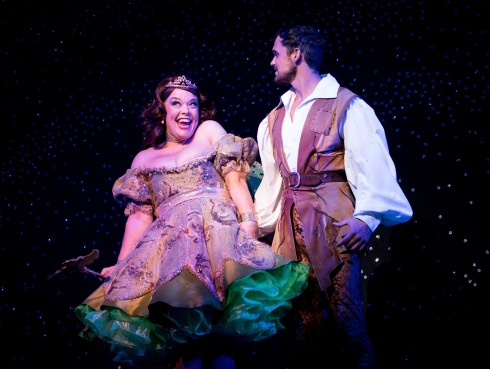 This year’s panto may be the Grand’s most lavish for years, containing moments of spectacle and glamour, but of course what matters most is the cast.  Qdos Entertainment has gathered a fine ensemble of familiar and not-so-familiar faces, all of whom go all out to deliver the goods.

In the title role is Joe McElderry, last seen on these boards as an excellent Joseph.  He sings like an angel from pop heaven, to be sure, but can he handle the comedy?  The answer is an unqualified yes.  McElderry is a natural for the panto style and makes an affable, adorable hero.  Lucy Kay is a beautiful Princess with a voice to match (her duets with McElderry are especially good); Adam C Booth’s Wishee Washee is a highly energised crowd pleaser and Ian Adams’s Widow Twankey is an old-school dame, played to perfection.  Lisa Riley, in great shape, is an amusing Slave of the Ring, bluff, Northern and friendly, but it is the Lazy Empress, played by Doreen who almost steals the show, giving Old Peking a decidedly and inescapably Black Country flavour.  Doreen also proves she is more than a one-trick pony (or should I say ‘oss’?) with a song-and-dance number that defies her supposedly lazy persona.  A real treat is Stefan Pejic’s delicious Abanazar.  Pejic plays the villain with such relish you can’t help liking him! Ben Faulks is fun as PC Ping Pong, although if you don’t know of his children’s TV gardening-based series, some of the references leave you a bit cold.  Neal Wright’s smart-talking Genie of the Lamp is a great surprise.

Michael Harrison and Alan McHugh’s script is faithful to the story – the bizarre mash-up of Arabian Nights and Chinese kitsch – while allowing for contemporary touches and moments of wonder.  We’ve seen flying carpets before but not like this one, but it’s a comic song routine about alternative employment for the characters that brings the house down.

Kelvin Towse leads a tight group of musicians. The glamorous dancers are complemented by kids from the Classic Academy of Dance. The belly laughs don’t stop coming and the impetus never flags.

This production is excellent value and unrelenting fun.  You couldn’t wish for a better show.