TALE TRAIL to the Prince and The Pauper

While the New Vic’s big Christmas production plays in the main house, tucked away around the back of the theatre, in the Stephen Joseph Studio, is a little gem of a show, a companion piece to the main event.  Aimed at pre-schoolers and their adults, this is a two-handed version of the Mark Twain classic.  First, we meet Tom Canty (Benedict Shaw) in his hovel.  Shaw immediately establishes a rapport with the young audience, eliciting our sympathy from the off.  Tom tells us of his hunger and invites us to imagine what we would eat if we were princes.  We move from the hovel to a street outside the palace – this is a promenade piece, with the Stephen Joseph Studio divided into four of the story’s key locations.  It’s up to us to find somewhere to sit; I find myself on the floor more often than not, but it’s a great vantage point to watch the kids get involved.  And get involved they do.  This lot don’t need much inviting, and the actors have to gauge when to respond and when to press on with the story, without ignoring or upsetting anyone.  It’s a fine line.

Tom encounters Prince Edward (Perry Moore) and the pair agree to see how the other half lives by swapping clothes and situations for a day.  Moore is great as the snooty but likeable prince.  It is when he appears as the snootier, less likable Lord Chamberlain that he is able to fire off his wittiest retorts.  We move through the palace garden to the palace itself, a lavishly decorated room with Tudor portraits and plenty of shiny bric-a-brac.  In his guise as the prince, Tom exhorts us to gather knickknacks to donate to a poor man so he can buy food.  “We still have plenty left,” he points out to the flabbergasted Chamberlain.

There are plenty of opportunities for interaction without resorting to pantomime shout-outs in this charming, funny and touching piece of theatrical storytelling, and there is much to enjoy even if your preschool days are far behind you.   Running at about fifty minutes, it’s a delicious, heart-warming treat to savour.

The piece draws on the innate kindness of small children and makes me wonder what happens to people that makes them lose this precious quality.  The message of social justice and equality may be simplified and simplistic but at heart it’s still a good one.   “We all need to share so we can all have enough,” concludes Tom Canty and it’s a message that is not just for Christmas but for life. 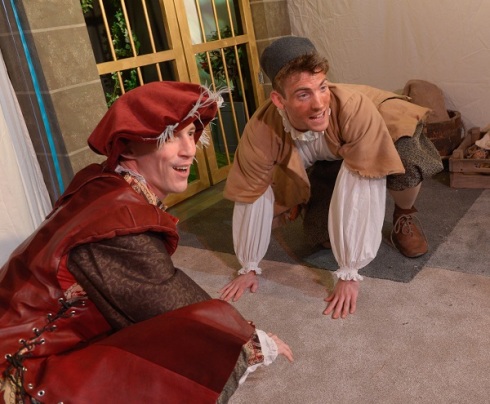 Novelist (Brough & Miller, sci fi, historical fantasy) Theatre critic http://williamstaffordnovelist.wordpress.com/ http://www.amazon.co.uk/-/e/B008AD0YGO and Actor - I can often be found walking the streets of Stratford upon Avon in the guise of the Bard! END_OF_DOCUMENT_TOKEN_TO_BE_REPLACED
This entry was posted on Saturday, December 21st, 2019 at 4:12 pm and tagged with Benedict Shaw, Mark Twain, New Vic Theatre, Newcastle under Lyme, Perry Moore, review, Tale Trail to the Prince and the Pauper and posted in Review, Theatre Review. You can follow any responses to this entry through the RSS 2.0 feed.
« Serving Fish
Slick and Slack »