Winsome Pinnock’s 2005 play gets a reworking in this touring production from Graeae Theatre Company and the Theatre Royal Plymouth.  Nella’s friend Cyrus, who does odd jobs around her house, was the driver of the train that killed her adopted son, Sonny, when he jumped from the platform.  Cyrus is seeking atonement and also answers.  He tries to piece together Sonny’s final days, looking for clues.  Sonny’s sister Zoe recognises him from the inquest and warns him off…

Pinnock reveals the action on a fractured timeline, which adds to the intrigue.  This is not so much a who- as a WHYdunit.  The more we discover, the more we realise we can never truly know what’s going on in someone’s mind.  We meet Sonny in flashbacks: are the fantasies he uses to entertain Christine from the launderette merely banter, or do they stem from paranoid delusion?  Ultimately, we are left with questions and an absence of resolution – but to me, this is harder hitting and more thought-provoking.

Amit Sharma directs a taut quintet with an assured hand.  Pinnock’s naturalistic dialogue is given room to elucidate and obfuscate, even though the setting (a neat, abstract multi-purpose space, designed by Amelia Jane Hankin) is stylised and undefined.  What comes across is the humanity of all involved – and there are some very powerful moments indeed.

Stanley J Browne gains our empathy at once as the traumatised train driver, trying to get a handle on things.  Shenagh Govan shines as den-mother Nella, as does Clare-Louise English as Christine, the woman upon whom Sonny lavishes attention and a load of money.  Evlyne Oyedokun is utterly credible as the daughter looking out for her mum’s interests, and Reece Pantry’s Sonny almost has me in tears – until I’m made to question whether his mental episode is just a joke, as Sonny claims…

In a play where nothing is fully explained only implied or hinted at, the audience is called upon to use their intelligence – we all love a mystery.  But this piece points out, quite starkly, that life isn’t like a whodunit.  Sometimes, you never find an answer, and sometimes love isn’t enough.

Intriguing, bewildering, moving and tragic, this is a piece that will stay with you long after the cast take their well-earned bows. 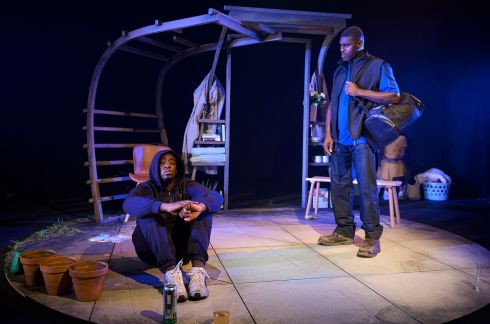 Novelist (Brough & Miller, sci fi, historical fantasy) Theatre critic http://williamstaffordnovelist.wordpress.com/ http://www.amazon.co.uk/-/e/B008AD0YGO and Actor - I can often be found walking the streets of Stratford upon Avon in the guise of the Bard! END_OF_DOCUMENT_TOKEN_TO_BE_REPLACED
This entry was posted on Thursday, November 21st, 2019 at 12:09 am and tagged with Amelia Jane Hankin, Amit Sharma, Clare-Louise English, Evlyne Oyedokun, Graeae Theatre Company, One Under, Reece Pantry, review, Shenagh Govan, Stanley J Browne, The REP Birmingham, Theatre Royal Plymouth, Winsome Pinnock and posted in Review, Theatre Review. You can follow any responses to this entry through the RSS 2.0 feed.
« Julie, Madly, Deeply
Blue Blood Brothers »