Coming Out in the Wash

The ground-breaking film from 1985 comes to the stage in this adaptation of his own screenplay by Hanif Kureishi.  It’s a story of personal identity versus culture, of being yourself at the expense of fitting in, or surrendering to tradition and expectation at the expense of happiness and fulfilment.

It’s a stylish production, all silver and glitterballs.  Even the fascist graffiti is in striking dayglo colours.  Snatches of Pet Shop Boys tunes, some new, some classics, help with the 80s feel, but we never hear enough of them, sometimes only a few bars to cover transitions.

Omar Malik is Omar, a mild-mannered Muslim who works his way up through his uncle Nasser’s businesses until he becomes manager of his own launderette.  He’s a likeable chap with a nice line in sarcasm – unlike Hareet Deol’s Salim, an aggressive wide-boy drug dealer in an oversized pink suit.  Omar encounters old school crony Johnny (Jonny Fines) and offers him a job.  The banter between the two barely veils the homoerotic attraction between them.  Fines does a good job of portraying Johnny’s break from his skinhead background.  He wants to better himself and, as uncle Nasser would say, improvement comes from business.  Omar’s dad, by contrast, thinks self-improvement comes from education.  But this is Thatcher’s Britain, and Nasser, a Pakistani businessman, can flourish in this environment.

As Nasser, Kammy Darweish is particularly strong.  At first, we see him as a comic figure, avuncular in fact, but we soon see the hypocrisy of the man: he keeps a mistress on the side while expecting his daughter to submit to traditional values.  The mistress, by the way, is played by the mighty Cathy Tyson, with hair as big as the 80s.  Tyson is unrecognisable when she doubles as Cherry, Salim’s bespectacled wife.

In something of a casting coup, Gordon Warnecke, who played Omar in the film, is back as Omar’s ailing Dad, who represents the weakened nature of socialism in this country – then as it is now.  Warnecke combines vulnerability with a certain sprightliness.

Kureishi’s writing combines profanity with lyricism and there are some great lines, but while I enjoy the social commentary and the innuendos, I don’t engage emotionally with the characters, although I do cheer on Nicole Jebeli as Tania, the daughter of Nasser, striking out for her independence.  Paddy Daly’s bovver boy Genghis is a shouty lampoon, banging on about Saint George and white pride, using the same kind of empty-headed slogans we hear from Brexiteers today.

There is chemistry between the two male leads.  Fines is certainly not without cocky charm – but it’s more about titillation than passion, and I’m dismayed to hear gasps from the audience when the two of them kiss.  Each other.  On the lips.  But that’s what the play points out: society hasn’t changed that much since the 1980s.  The evils presented here are still with us, like extra-stubborn stains.  What progress we have made seems to be slipping away.

While I appreciate the talent of everyone involved and the adeptness of the adaptation, I find I’m a little underwhelmed by the whole.  I want to be more invested in the love story but  I’m afraid it’s a bit wishy-washy. 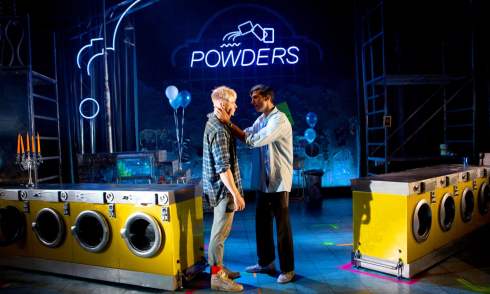 Novelist (Brough & Miller, sci fi, historical fantasy) Theatre critic http://williamstaffordnovelist.wordpress.com/ http://www.amazon.co.uk/-/e/B008AD0YGO and Actor - I can often be found walking the streets of Stratford upon Avon in the guise of the Bard! END_OF_DOCUMENT_TOKEN_TO_BE_REPLACED
This entry was posted on Friday, November 8th, 2019 at 12:52 am and tagged with Cathy Tyson, Gordon Warnecke, Hanif Kureishi, Jonny Fines, Kammy Darweish, My Beautiful Laundrette, Nicole Jebeli, Omar Malik, Paddy Daly, Pet Shop Boys, review, The REP Birmingham and posted in Review, Theatre Review. You can follow any responses to this entry through the RSS 2.0 feed.
« The Joker is Wild
Concerted Effort »