The Joker is Wild

Welsh National Opera is back in town and they’ve brought with them this revival of James Macdonald’s 2002 production.  Set in what looks like Nixon-era America, the production gives us the Duke as a womanising, presidential figure, complete with Oval Office – How prescient!  His courtiers are besuited, secret service types, and his jester, the title character, is a lounge-type entertainer in chequered blazer.  Rigoletto’s humour is cruel, of the roasting variety, and it soon lands him in trouble when the butt of his jokes pronounces his curse upon the comic.  The notion of being curse obsesses Rigoletto for the rest of the story – it’s how he views everything that happens from that point, while everyone else is going around enjoying themselves, playing ‘hilarious’ pranks, falling in love, and did I mention the womanising?

David Junghoon Kim is a magnificent Duke, sharp in his tuxedo with a tenor as clear as a bell.  Verdi gives him the best tunes, the most seductive melodic lines – it’s like the Duke’s superpower, or supervillain power, because we have to keep in mind, this chap is the bad guy here.  When he sings with Rigoletto’s daughter, this is not two people falling in love, although he later admits “her modesty almost drove me to virtue”.  He’s a fine one to talk, in that most famous, most jaunty aria, that women are fickle and not to be trusted.  Pot/kettle, mate.  It is this dim view of the ladies that lets him treat them so badly.

Mark S Doss, limping and shuffling around, is superbly plaintive and melodramatic.  It’s not the most enlightened approach to keep your daughter shut indoors but we sense that it comes from deep love for her and a desire to protect her from this environment that treats women as objects for male enjoyment.  Rigoletto’s impassioned plea and his final heart-wrenching grief are powerfully done.  Quite rightly, he gets the hump!

As the daughter, Haegee Lee is quite simply the best Gilda I’ve ever seen.  Innocent yet inquisitive, she has inherited her dad’s sense of the melodramatic, and there’s a naïve nobility in her self-sacrifice for a cad who doesn’t deserve it.  Lee almost steals the show, whether it’s duetting with Doss or Kim, or singing solo.  A towering performance from such a diminutive figure.

There is strong support as ever from the WNO chorus – including offstage when they give voice to the wind during the stormy climactic scene – and from Woytek Gierlach’s burly assassin Sparafucile, a powerful bass that seems to come from his boots, and from Emma Carrington as the assassin’s sister Maddalena, bringing a sleazy touch of humour to proceedings.

Alexander Joel’s baton elicits stirring emotion and a sense of foreboding from the orchestra.  It all comes to a head for a flawless third act of high drama and high emotion.  With a clarity of storytelling, superlative vocal and acting talent, and excellent production values, this is Verdi how he should be presented, a gripping emotional ride that thrills and exhilarates. 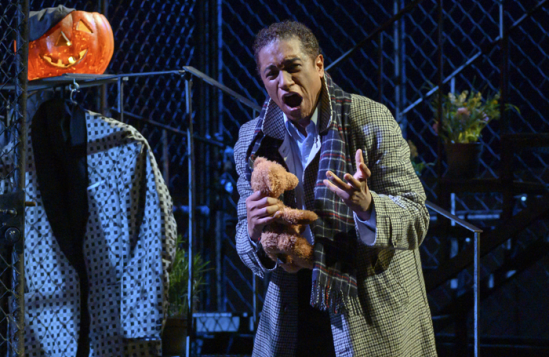 Novelist (Brough & Miller, sci fi, historical fantasy) Theatre critic http://williamstaffordnovelist.wordpress.com/ http://www.amazon.co.uk/-/e/B008AD0YGO and Actor - I can often be found walking the streets of Stratford upon Avon in the guise of the Bard! END_OF_DOCUMENT_TOKEN_TO_BE_REPLACED
This entry was posted on Thursday, November 7th, 2019 at 11:24 am and tagged with Alexander Joel, Birmingham Hippodrome, David Junghoon Kim, Emma Carrington, Giuseppe Verdi, Haegee Lee, James Macdonald, Mark S Doss, review, Rigoletto, Welsh National Opera, WNO, Woytek Gierlach and posted in Opera review, Review. You can follow any responses to this entry through the RSS 2.0 feed.
« Kin Dread
Coming Out in the Wash »