One hundred and twenty years ago, the first incarnation of the Hippodrome was a circus (Hippo meaning horse, of course, and drome meaning arena or stadium).  Now, the theatre’s birthday celebrations culminate in this postmodern version of the traditional entertainment form.  In fact, I am surprised by how up-to-date it all is, given the retro title which led me to expect something more in the way of a historical reconstruction, perhaps.

What we get is a succession of traditional acts: balancers, tumblers, high-fliers, hosted by a ringmaster (although there is no ring).  He is ‘Willy Whipsnade’, a charming, older gentleman who exudes warmth, bonhomie and an American accent from behind a stunt moustache of epic proportions.  The production leans toward the other side of the Atlantic in its aesthetic, with its razzmatazz and sideshow.

The first half gives us a stylised look ‘behind the scenes’ with some energetic roustabouts wielding sledgehammers to represent the erecting of the big top.  There are acts, going through their routines, including a couple on a seesaw, The Daring Desafios, a balancing act: The Sensational Mikhail Sozonov – and you wonder what a health-and-safety officer would make of it all.  It’s impressive, death-defying stuff and, unlike on the telly, the jeopardy is almost palpable.  A contortionist (‘Serpentina’ aka Senayet Asefa Amare)  bends your mind as her bottom half runs rings around her own head.  It’s compelling and slightly sickening and yet marvellous all at the same time.

Between acts, our host enlists children from the audience to assist with his magic tricks.  The banter here will be familiar to panto-goers, and Whipsnade is adept at it, quick-thinking and witty.  Of course, the kids deliver the goods in terms of cuteness and surprise.

There’s another balancer, this one going for height, The Great Rokardy Rodriguez, and an aerial duo, the Flying Fredonis (Daria Shelest and Vadym Pankevych), a graceful couple whose act is beautiful despite or because of the inherent danger of it.

The first half climaxes with the arrival of a couple of elephants, mother and baby.  Fear not, animal rights supporters; these are puppets, War Horse style, and they are magnificent.   You have to remember it’s the puppeteers you’re applauding rather than the animals!  In 1903, of course, and for a long time after, real animals would have been drafted in to provide ‘entertainment’.  Things have come a long way since then, thank goodness.

The second half is more of a circus proper.  There’s a juggler (the Great Gaston, aka Francois Borie) and a woman who spins hula-hoops while balancing on a ball (Mademoiselle Natalia Leontieva) and they’re great at what they do, but I’m practically gasping for some clowns.  A bit of slapstick to leaven all the jeopardy.

Then comes ‘The Training of Wild Animals’ in which Willy Whipsnade gets five young kids up and introduces them to his baby racoon – another puppet, on a simpler scale!  Not only is it the funniest part of the evening, it’s one of the funniest  of such routines I’ve ever seen.  Whipsnade (to give him his real name, David Williamson) is brilliant at this, and the Hippodrome should snap him up for panto next year.

The Remarkable Risleys close the show with a display of breath-taking acrobatics, where the one uses the other as a prop, spinning him around in the air with his feet.  All the acts are impressive – they have to be – and I clap my hands off in appreciation of this international cast.  But I still would like a custard pie or a bucket of water to complete this circus that overlooks a bit of slosh. 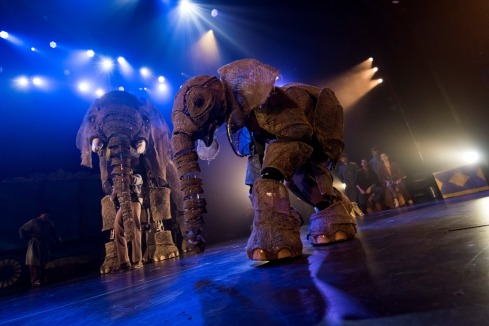 Queenie and Peanut, stealing the show

Novelist (Brough & Miller, sci fi, historical fantasy) Theatre critic http://williamstaffordnovelist.wordpress.com/ http://www.amazon.co.uk/-/e/B008AD0YGO and Actor - I can often be found walking the streets of Stratford upon Avon in the guise of the Bard! END_OF_DOCUMENT_TOKEN_TO_BE_REPLACED
This entry was posted on Saturday, October 26th, 2019 at 7:15 am and tagged with Birmingham Hippodrome, circus, Circus 1903, Daria Shelest, David Williamson, Francois Borie, Natalia Leontieva, review, Rokardy Rodriguez, Senayet Asefa Amare, Vadym Pankevych and posted in Review. You can follow any responses to this entry through the RSS 2.0 feed.
« Terribly Funny
A Reign of Two Halves »