Almost forty years after its first production, Willy Russell’s acerbic two-hander is doing the rounds again, and it’s a pleasure to reconnect with the story of hairdresser Rita as she pursues her academic aspirations in order to better herself and improve her lot.  The tutor assigned to her by the Open University is jaded lecturer and functioning alcoholic Frank, who overcomes his reluctance and forms a bond with his persistent and unconventional new student.

We laugh at Rita’s gaffes, as we meet her through Frank’s eyes – the play credits us with a modicum of literary knowledge – and we see, also through Frank’s eyes, how education changes the bright but awkward young woman into a confident, knowledgeable scholar.  Frank thinks he has created a monster, Frankenstein-style – but what Rita has done is break the mould of her working-class upbringing.  By aspiring to something other than material gain and a ‘good night out’ down the pub, Rita has changed her life.  She now has something she never had before: choices.

As Frank, Stephen Tompkinson does a flawless job, dripping with bitterness and sarcasm.  Jessica Johnson’s Rita has impeccable comic timing, although her accent can wander around the Mersey estuary (and sometimes across the Irish Sea).  There is nothing to say that Rita has to be from Russell’s hometown of Liverpool; she could spring from any working-class community.

The star of the show is Willy Russell, and it’s great to be reminded of the richness of his writing. There is much more to the play than the snappy jokes and the developing relationship and mutual respect between tutor and student.  There is social commentary about the rigidity of the class system and the perceived need to maintain the boundaries that define who people are.  Rita battles against the prevailing working-class attitude that art, books, the opera and so on are ‘not for us’, but once the genie is out of the bottle, she is unable to go back to pub singalongs and settling down with her lot.

Director Max Roberts navigates Rita’s mercurial mood changes: one minute she’s mouthing off, making wise cracks, and the next she’s revealing some home truth; Roberts keeps his cast of two busy.  Both characters are somewhat histrionic in their own way so there is no danger of things becoming static.  Patrick Connellan’s set, with books everywhere, encapsulates dishevelled academia (representing Frank himself) with Rita as an agent of change, for herself and for her unwilling tutor.  Neither of their lives will be quite the same again.

There are plenty of laughs, and even a couple of touching moments.  The message is not heavy-handed, but I wonder how relevant it is today.  And then I think of the obstacles placed in the path of working-class people that hinder their access to higher education, some of which come from the working-class mindset itself, and I think, yes, the play still has currency.

A modern classic, finely presented, this play will make you laugh and make you think. 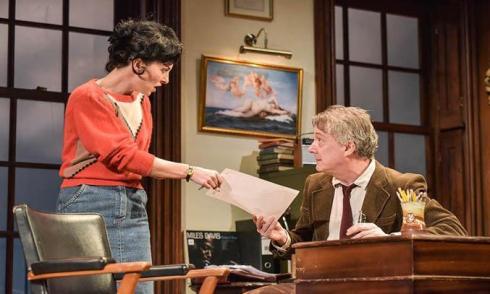 Novelist (Brough & Miller, sci fi, historical fantasy) Theatre critic http://williamstaffordnovelist.wordpress.com/ http://www.amazon.co.uk/-/e/B008AD0YGO and Actor - I can often be found walking the streets of Stratford upon Avon in the guise of the Bard! END_OF_DOCUMENT_TOKEN_TO_BE_REPLACED
This entry was posted on Monday, July 8th, 2019 at 11:20 pm and tagged with Educating Rita, Grand Theatre Wolverhampton, Jessica Johnson, Max Roberts, Patrick Connellan, review, Stephen Tompkinson, Willy Russell and posted in Review, Theatre Review. You can follow any responses to this entry through the RSS 2.0 feed.
« Table Talk
Flooded with Meaning »