All’s Fairy in Love and War

The Crescent’s summer touring production this year is Shakespeare’s enduring romantic comedy with a supernatural twist, and I am lucky enough to catch an indoor performance rather than brave the vagaries of the British summer!

This is an enjoyable, accessible production – Director Georgina Evans opts for modern-dress on a simple set of slender branches and fairy lights; although, I do find the draconian laws of Athens at odds with the familiarity of the attire.  I think more needs to be made of the sheer unreasonableness of the patriarchy here (Marry whom I tell you to or be celibate for the rest of your life) and poor Hermia (Charlotte Thompson) needs to be more terrified/upset/resentful/what-have-you at the onset, so that when Lysander (the excellent Jacob Williams) steps forward with an escape plan, it comes as more of a relief, a desperate measure for desperate times.  Hold up, I did say this is a comedy… In Shakespeare, a comedy is where the problems of the drama are overcome by the characters (as opposed to tragedy, where the characters are overcome by the problems).  After this dark and severe (and potentially tragic) opening, the fun and frolics in the forest should come as sharper contrast.  Evans has an eye for comic business, and it’s the little details, the interplay, the fleeting expressions, that bring the joy to this production.

Ollie Jones is Duke Theseus – he warms into the role as the play goes on, lacking the imperious tones and power of Andrew Cowie’s magnificent fairy king Oberon (special mention to Angela Daniels for his striking costume and headdress).  Aimee Ferguson is a subdued Hippolyta, yet this conquered Amazon is not shy to express her views, through action, while Shady Murphy’s Titania is a dynamic presence.  Les Stringer brings gravitas as the unreasonable Egeus, softening into a kind of Polonius figure when he is finally overruled by the Duke.

Charlotte Thompson has her moments as Hermia – particularly the slanging match with Jessica Shannon’s marvellous Helena.  Jordan Bird is a pleasing Demetrius, vying with Jacob Williams’s Lysander – both do the lovestruck fool bit rather well.  Dayna Bateman is thoroughly charming as the hardworking Puck, whose meddling in mortal affairs does not always go to plan.

The Mechanicals are a likeable bunch, led by ‘Rita’ Quince (Nicole Poole) with Scott Wilson’s Flute blossoming into a sublimely ridiculous Thisbe, towering over a diminutive Pyramus (Crescent stalwart James David Knapp having a crack at Bottom, so to speak).  Knapp’s comic instincts are sound and I’d say he could afford to be even more bullish as Bottom dominates the group’s rehearsals.

While there are some line-readings that don’t quite come across, on the whole everyone handles the language rather well and with conviction, which is no mean feat when there are scenes comprised of rhyming couplets.  Of course, the play-within-a-play provides the most laughs – it’s one of the funniest scenes in Shakespeare, in all theatre, probably, and the company do an excellent, raucous job with it.  There’s a lovely celebratory feel to the closing moments and a rousing song to finish.  Funny and sweet, the show would perhaps benefit from starker contrast between the dark and light to intensify the impact of both. 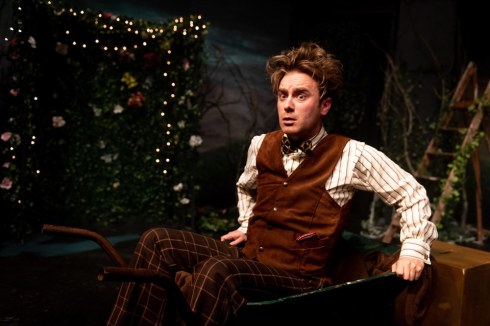