John Vanbrugh’s comedy from 1697 is given an exuberant revival in this new production for the RSC by Phillip Breen.  A prologue points out that the playwright got his inspiration from us, the audience – and this is all we need to remind us that human nature, and in particular, human foibles have not changed a jot.  Breen sensibly keeps everything in and of the period and because of this, the show works admirably.  Mark Bailey’s set is a theatre, with plush crimson drapes and a pelmet, and footlights around three sides of the stage, setting the action against a backdrop of artifice, while the lavish costumes denote both class and character.

A big name draw for this splendid company is TV favourite Caroline Quentin as the monstrously vain and conceited Lady Fanciful.  Quentin is made for this kind of stuff, and gives a hugely enjoyable performance.  Hardly subtle, Vanbrugh names his characters to suit their natures – Quentin’s portrayal is far from one-note and is an absolute joy to behold.

Also appearing, but mainly as a supernumerary is veteran comic Les Dennis, cutting his teeth at the RSC.  I’m assuming he has a more featured role in this play’s companion piece in repertory – but more of that anon.

Released from the confines of their gallery, the musicians feature on stage, coming and going to cover transitions and to accompany the songs – Paddy Cunneen’s  original composition, vibrant, sometimes discordant, enhance the period flavour and the comical nature of proceedings.  Rosalind Steele and Toby Webster are in splendid voice as Pipe and Treble respectively.

After much farcical comings-and-goings, including Lord Brute donning a frock and beating up the night’s watch like Old Mother Riley, the action takes a more dramatic turn, and we appreciate the depths of despair and danger Lady Brute endures.  Gilbreath and Slinger flip from wry comic barbs to horribly tense domestic abuse and it’s gripping stuff.  The plot is resolved with a quick succession of gasp-worthy revelations but the Brutes remain together, a bitter note among the hilarity and happiness.

Expertly presented, this production will get you laughing from the off.  It does run a bit long; this bum on a seat was a bit numb on the seat well before the end.  I advise you to get out and stretch your legs during the interval.  It’s a long haul but it’s more than worth it. 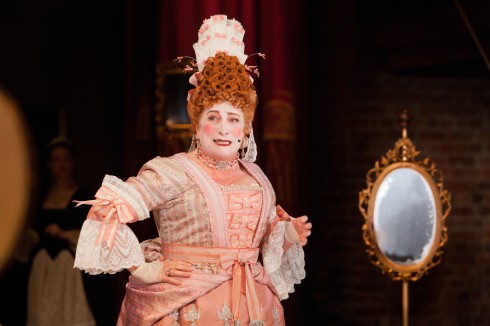 Novelist (Brough & Miller, sci fi, historical fantasy) Theatre critic http://williamstaffordnovelist.wordpress.com/ http://www.amazon.co.uk/-/e/B008AD0YGO and Actor - I can often be found walking the streets of Stratford upon Avon in the guise of the Bard! END_OF_DOCUMENT_TOKEN_TO_BE_REPLACED
This entry was posted on Thursday, June 6th, 2019 at 9:22 am and tagged with Alexandra Gilbreath, Caroline Quentin, John Hodgkinson, John Vanbrugh, Jonathan Slinger, Les Dennis, Mark Bailey, Natalie Dew, Paddy Cunneen, Phillip Breen, review, Rosalind Steele, RSC, Rufus Hound, Stratford upon Avon, The Provoked Wife, The Swan Theatre, Toby Webster and posted in Review, Theatre Review. You can follow any responses to this entry through the RSS 2.0 feed.
« Worth a Gander
All’s Fairy in Love and War »