THE PICTURE OF DORIAN GRAY

Tilted Wig Productions bring this new adaptation of Oscar Wilde’s only novel to the stage, courtesy of Sean Aydon, who also directs.  It’s a stylish affair, with a set by Sarah Beaton that suggests Victorian grandeur left to rot.  Beauty in decay is an emblem throughout this tale of handsome young Dorian who, wishing to retain the beauty captured in his portrait, makes a wish… As time goes by, it is the painting that shows signs of age, cruelty and dissipation, while the subject himself is unchanged.  Dorian takes to covering his painting, only to display ‘poor traits’ in his conduct.

Gavin Fowler begins as a sweet, appealing Dorian, subtly hardening his characterisation as his hedonistic pursuits increase his sociopathy. Dorian models himself on his friend, Lord Henry Wotton, played by Jonathan Wrather (evil Pierce off of Emmerdale).  Wrather is marvellous in the role, lazily debonair and louche, the aphorisms dripping from his lips.  Aydon’s script fizzes with Wildean wit, and Wrather has the perfect delivery.  In contrast is Daniel Goode as Basil the artist.  Here Aydon brings Wilde’s homoerotic undertones closer to the surface, although nothing is explicit.

Beneath the humour and the urbane epigrams, there is an undercurrent of dread and foreboding, accentuated by Jon McLeod’s music and sound design.  The peeling walls and general dinginess aid the idea that beauty is transient and decay is inevitable.  As they seek pleasure in whatever form, the characters are overshadowed by impending mortality.  For a story that concerns the passage of time, this production is curiously timeless in his setting: there are nods to the story’s Victorian origins, in the costumes, but then there are also dresses and slacks that are out of period, and Basil’s plastic bottles of white spirit, let alone the polythene sheet Dorian makes use of, American Psycho style.  Some of these anachronisms jar, others seem to fit, but nothing dilutes the overall tone of the production.

Dorian’s decadence is stylised, with choreography by Jo Meredith and a few masks and electropop beats.  It’s all rather classy so when a murder happens, it’s all the more visceral.

All in all, it’s a gripping version, although I did find it slows a little as it heads towards the climax.  A little more intensity in those final encounters would not go amiss.  I love the way the dreaded painting was handled.  Like Wilde, Aydon leaves it to our imaginations, and imagined horrors and imagined depravities are invariably more effective than depicted ones. 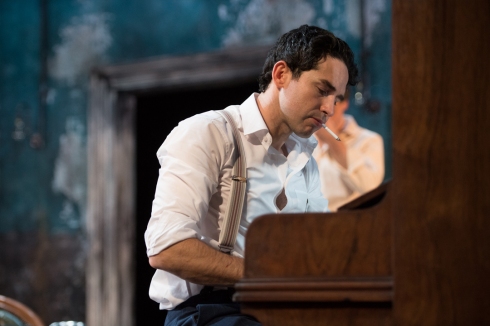 Look at his face; it’s a picture! Gavin Fowler as Dorian Gray

Novelist (Brough & Miller, sci fi, historical fantasy) Theatre critic http://williamstaffordnovelist.wordpress.com/ http://www.amazon.co.uk/-/e/B008AD0YGO and Actor - I can often be found walking the streets of Stratford upon Avon in the guise of the Bard! END_OF_DOCUMENT_TOKEN_TO_BE_REPLACED
This entry was posted on Saturday, May 11th, 2019 at 9:00 pm and tagged with Adele James, Daniel Goode, Festival Theatre, Gavin Fowler, Jonathan Wrather, Kate Dobson, Malvern, Malvern Theatres, Oscar Wilde, Phoebe Pryce, review, Samuel Townsend, Sean Aydon, The Picture of Dorian Gray, Tilted Wig Productions and posted in Review, Theatre Review. You can follow any responses to this entry through the RSS 2.0 feed.
« Dropping the Soap
Two Piece »