Four actors from a defunct Australian soap opera are reunited for a commemorative special in which they are to play all the parts (“Nobody will notice”).  Their week of rehearsals will culminate in a live broadcast.  There is a lot at stake.

That’s the premise of Andrew Norris’s bonzer new musical, which satirises the sunny optimism of the shows that dominated television in the 1990s.  The rehearsal scenes are hilarious, sending up the exposition-heavy dialogue, the public service information, and the outlandish plots.  But Norris intersperses them with glimpses into the actors’ lives.  We see the effects of being killed off and being unable to escape your typecasting.  The show is much more than silly satire; there is substance here in the melodrama of the actors’ real lives.

The songs are stonkers.  Disillusioned Angie, now working at a fish counter, sings the searing ‘Take the Knife’ bringing the show’s first dark moment.  Brock and Marlene belt out a smashing duet, ”Don’t Give Up” – the soap was a musical serial, a genius idea, ripe with comic potential.  There’s a brilliantly catchy parody, “Lucky Plucky Me” that infects my mind for the rest of the evening.  The highlight though is “Chains Around My Heart” in which Bobbi (the amazing Sarah-Louise Young) treats us to a dazzling display of vocal dexterity while parodying pretentious pop videos and earnest oversinging.  The number, quite rightly, brings the house down.

Young is hilarious as budding lesbian-mechanic Bobbi, and she is matched by Myke Cotton’s Brock (with mullet attached to his cap!).   Simon Snashall plays the father figures and the doctor – a deathbed scene is painfully funny – while Julie Clare is practically perfect as veteran soap actress Steph, who plays the soap’s busybody Mrs Mingle, and star-crossed lover Marlene.

Special mention goes to Pogo, the soap’s canine superstar, who makes a vital contribution to the plot!

The laughs keep coming but I get the sense of an underlying affection for the material that inspired the mockery.  There is also commentary here about the changes in televisual fare reflecting a loss of innocence and optimism in society, as the sunshine soaps have been usurped by so-called reality TV.

Thoroughly exhilarating, this show, like the serials it sends up, ought to run and run indefinitely!  With book, music, lyrics and direction all coming from the same man, Andrew Norris is some kind of genius, I reckon. 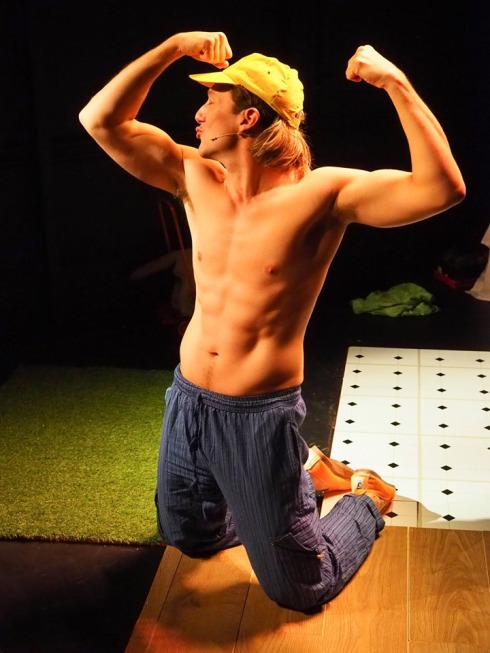 Mullet over: Myke Cotton as Brock

Novelist (Brough & Miller, sci fi, historical fantasy) Theatre critic http://williamstaffordnovelist.wordpress.com/ http://www.amazon.co.uk/-/e/B008AD0YGO and Actor - I can often be found walking the streets of Stratford upon Avon in the guise of the Bard! END_OF_DOCUMENT_TOKEN_TO_BE_REPLACED
This entry was posted on Saturday, May 11th, 2019 at 7:52 am and tagged with Andrew Norris, Birmingham, Julie Clare, musical, Myke Cotton, review, Sarah-Louise Young, Simon Snashall, Summer Street, The Old Joint Stock and posted in musical, Review, Theatre Review. You can follow any responses to this entry through the RSS 2.0 feed.
« Splendid!
Picture Imperfect »