THE MYSTERY OF IRMA VEP

Charles Ludlam’s camp classic is more well-known in the USA than on this side of the pond.  A two-hander that parodies Victorian melodrama, Gothic romances, and creaky old horror films, this is a chance for a pair of actors to showcase their versatility and, equally importantly, their quick-change skills.  Lady Enid, second wife to Lord Edgar, pries into the history of the family estate of Mandacrest.  She unearths a tale of vampires, werewolves and Egyptology, while beyond the French windows, a wolf preys on lambs, spreading terror…

Stuart Horobin is great as stuffy Lord Edgar, more tweed than man, clinging to the memories of his late first wife.  Horobin throws himself into his roles with gusto: Edgar conjuring a long-dead Egyptian queen, for example; or as dour housekeeper Jane, serving up huge dollops of exposition.

He is joined by Darren Haywood, his match in wide-eyed histrionics.  Haywood is a hoot as stable man Nicodemus, stumping around on a ‘wooden’ leg, and he’s magnificent as the lip-quivering Lady Enid.  His appearance as the reincarnated mummy is a highlight – in fact, whenever he’s on stage, which is most of the time, he delivers, in a consistently funny performance that is a real treat to behold.

Both actors handle the florid verbiage Ludlam liberally doles out with conviction.  The dialogue paraphrases the likes of Shakespeare, Wilde and Poe and is riddled with daftness and peppered with some choice double entendres – I could always do with more of these.  Ludlam’s script comes across as somewhat patchy but director Simon Ravenhill keeps the laughs coming with some delicious bits of comic business.  Nicodemus screwing his wooden leg back on, for example, or the hilariously pedestrian werewolf transformation scene.

In the end, it’s the playing not the material that proves the more entertaining.  Not so much Hammer, as Sledgehammer Horror, this is a case of the high quality of the production compensating for any weakness in the script, making for a hugely entertaining evening that deserves to be seen by greater numbers. 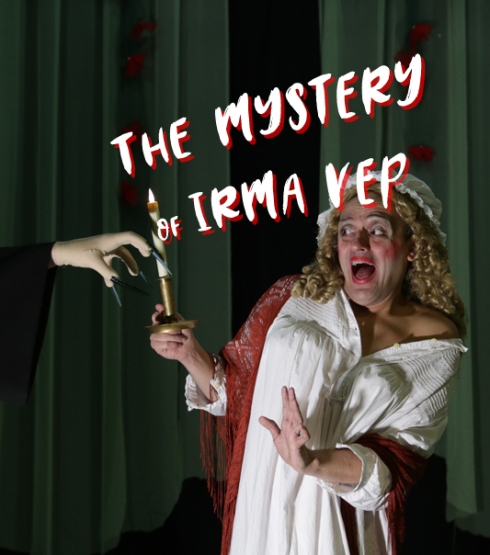 Darren Haywood in a publicity shot

Novelist (Brough & Miller, sci fi, historical fantasy) Theatre critic http://williamstaffordnovelist.wordpress.com/ http://www.amazon.co.uk/-/e/B008AD0YGO and Actor - I can often be found walking the streets of Stratford upon Avon in the guise of the Bard! END_OF_DOCUMENT_TOKEN_TO_BE_REPLACED
This entry was posted on Saturday, May 4th, 2019 at 7:05 am and tagged with Birmingham, Blue Orange Theatre, Charles Ludlam, Darren Haywood, review, Simon Ravenhill, Stuart Horobin, The Mystery of Irma Vep and posted in Review, Theatre Review. You can follow any responses to this entry through the RSS 2.0 feed.
« Shrewd Moves
Great Scott! »