THE TAMING OF THE SHREW

Gender-swapping is all the rage in theatre these days but if there’s a play where changing the men to women and vice versa actually makes a point about the world we live in, it’s this one, Shakespeare’s not-so-romantic comedy about conformity to gender roles.  The setting is a matriarchy, instantly conjuring memories of The Two Ronnies and their Worm That Turned series.  While that show was about revolution, Shakespeare’s is about moulding the individual to comply with societal norms.  Both, I think, show the limitations of expecting as gender to behave in a certain way.  Unlike The Two Ronnies’ serial, which was set in a dystopian future, this production is set very much in the 1590s and things are ticking along nicely, thank you, with women, mature women, ruling the roost as captains of trade and industry.

Baptista Minola (a strident Amanda Harris) is trying to marry off her sons.  The one is sweet and lovely (and hilarious – beautifully played by a hair-tossing James Cooney); the other is aggressive and ferocious – but these women are not cowed by such masculine outbursts, mainly because in their world, such displays are exceedingly rare.  ‘Kate’s tantrums are perceived as an individual’s aberrations, rather than the way that men carry on in general.  As Katherine, Joseph Arkley is both a commanding and an appealing presence.  He is a stallion to be broken, a hound to be brought to heel, a direct contrast to the effeminacy prevalent in other men, for example Richard Clews’s camp old retainer, Grumio.

The woman for the job is Claire Price’s wild-haired Petruchia, all gusto and caprice – it’s OK for women to have their norm-stretching eccentricities, of course.  Well up for a bit of ruff, Price is delightfully unpredictable and very funny.  In fact, the production is riddled with funny women.  There’s a joyous double act: Emily Johnstone’s Lucentia and Laura Elsworthy’s Trania – the latter a real hoot when disguised as a noblewoman.  Sophie Stanton’s Gremia glides around as though on wheels, while Amy Trigg’s Biondella, actually on wheels, darts around, adding to the farcical elements of the action.  There is an elegant turn from Amelia Donkor’s Hortensia.  This Padua is more like Cougar Town, with women of a certain age eyeing up the young male totty.

There’s a vibrant, gorgeous score by Ruth Chan and sumptuous period costumes by Hannah Clark.  Director Justin Audibert keeps the staging traditional – apart from the gender-swaps – and it works brilliantly.  A finely-tuned ensemble keeps the laughs coming and the gender-swaps cast new light on what can be a problematic piece for present-day audiences.  Inversion puts the status quo in the spotlight, and we see how ludicrous it can be to expect individuals to tailor their conduct to adhere to one end of the spectrum or the other.

There’s a lightness of touch to the whole enterprise, so don’t dread a sociological treatise.  This is a hugely enjoyable, refreshing take on a classic that works beautifully.  Wonderful. 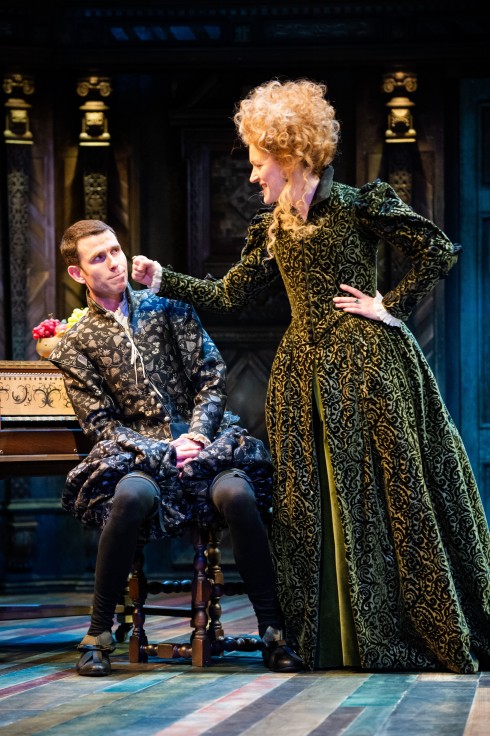 Novelist (Brough & Miller, sci fi, historical fantasy) Theatre critic http://williamstaffordnovelist.wordpress.com/ http://www.amazon.co.uk/-/e/B008AD0YGO and Actor - I can often be found walking the streets of Stratford upon Avon in the guise of the Bard! END_OF_DOCUMENT_TOKEN_TO_BE_REPLACED
This entry was posted on Friday, May 3rd, 2019 at 7:07 am and tagged with Amanda Harris, Amelia Donkor, Amy Trigg, Claire Price, Emily Johnstone, Hannah Clark, James Cooney, Joseph Arkley, Justin Audibert, Laura Elsworthy, review, Royal Shakespeare Theatre, RSC, Ruth Chan, Sophie Stanton, The Taming of the Shrew, William Shakespeare and posted in Review, Shakespeare, Theatre Review. You can follow any responses to this entry through the RSS 2.0 feed.
« Holiday Camp
Camptastic! »