Don’t you just hate it when your wedding is called off so your mates take you abroad to a hotel to drink it off and you end up at the same place as your intended and their mates?  This is the set-up for this new jukebox musical, the flimsy framework on which to hang hit songs from the 1980s.  Add to the mix a subplot about an anonymous hotel inspector and a stalled love affair between the hotel owners and we’re pretty much set.  As with other shows of this type, we get musical theatre performers emoting their way through vaguely relevant pop songs – part of the fun is the recognition of each song.

But what sets this one above those other shows is the star quality of its leading lights.  Talent show champion Joe McElderry is Garry, the hotel’s entertainment officer, sporting a pink (rather than a red or even a yellow) coat, coming across like the love child of George Michael and Dale Winton.  The pop songs are a walk in the park for McElderry’s excellent vocals but it is especially pleasing to see how much he has developed as a comic actor, with flawless timing, a neat line in facial expressions, and some energetic physical comedy.  It’s camper than Christmas and it feels like McElderry has found his home.

Also bringing the goods is veteran comic actor and impressionist Kate Robbins, appearing as Consuela the maid – from the Allo Allo school of funny foreigners.  In the hands of a pro like Robbins, the character is more than a stereotype, and is a superb comic creation in its own right.  Robbins gets the chance to show off her impressions, through the prism of Consuela attempting to make the hotel look busy by donning a succession of fancy-dress costumes (didn’t they use that idea in Crossroads?).

Other members of the company get their moments to shine.  Amelle Berrabah’s Serena delivers a lovely Only You, Karina Hind’s Lorraine gives a kick-ass Call Me and Cellen Chugg Jones’s Olly shows his vocal range with a-ha’s tricksy Take On Me.  Emily Tierney gives a broad comic turn as accident-prone snob, Christine, who is not all that she seems… Neil McDermott’s Robert appeals, with a neat delivery of some snappy one-liners.

Michael Gyngell’s script keeps the complications uncomplicated; we shrug off the thinness of the plot because he gives us so many funny lines.  Nick Winston’s choreography recalls the signature moves of the decade, and the band, led by MD Charlie Ingles, gets the audience on its feet.

Strindberg or Ibsen, this ain’t, but it’s not trying to be.  While Club Tropicana doesn’t exactly push the boundaries of theatre, it’s undemanding, hilarious, old-fashioned fun, performed by a likeable company.

But it strikes me as odd that the famous and much-loved title song is never sung.  Perhaps the rights could not be obtained.  In that case, they should have called the show something else – but then I suppose Hotel California is too downbeat for this hugely enjoyable farcical frolic. 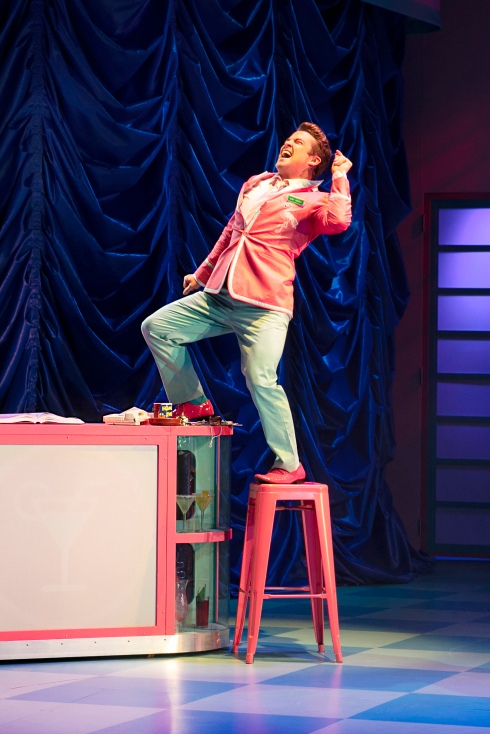