On the occasion of their 75th birthday, twin sisters Nora and Dora Chance receive an invitation to the 100th birthday party of their strange and estranged father, Melchior Hazard, a feted actor of the old school.  As the twins get ready, they recount the story of their family.  It’s a tale of the theatre, of absentee fathers, of choosing a family…

With this adaptation of the Angela Carter novel, Emma Rice makes a welcome return to form and to the stage, appearing as Nora Chance alongside Gareth Snook’s Dora. The pair are well-suited, and so are the other pairs of actors who portray the twins at earlier points in their lives and dancing careers.  Members of the beret-sporting chorus step forward and assume the roles of Melchior and his twin Peregrine, and the action flows fluidly through the stages of the story.  Fluidity is key, here; gender fluidity and colour fluidity in the casting, which adds to the theatricality of the telling and detracts nothing from the spellbinding charm of the enterprise.

Paul Hunter (the older Melchior) is a hoot as end-of-the-pier comic, Gorgeous George; the show has a definite whiff of seaside postcard and music hall vulgarity – which makes it all the more glorious.  Long-time Rice collaborator, Mike Shepherd (the older Peregrine) also features as a deadpan stagehand, but it’s Katy Owen’s Grandma Chance, waddling about in a body suit who garners the most laughs from the more outre material.

Melissa James and Omari Douglas portray the twins at the height of their careers, getting to know the ways of the world and men.  The dancing is lively and also elegant throughout, thanks to Etta Murfitt’s choreography, and the music, supplied by an onstage trio (augmented by cast members) is sublime, with Ian Ross’s original compositions nestled side-by-side with classics like “Let’s Face The Music and Dance” and “Is You Is Or Is You Ain’t My Baby”.

The whole production has Emma Rice stamped all over it.  This is a Kneehigh show in everything but name.  The fun, the storytelling, the music, the puppetry, the romanticism, the wisdom… It’s all here to be savoured.

A magical, captivating piece that tickles the ribs and touches the heart.  It’s a wise critic who knows something special when he sees it. 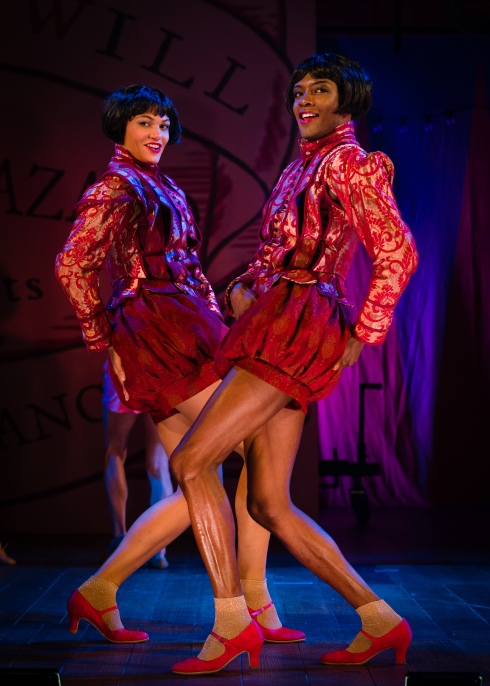