This isn’t the first musical to mine Romeo & Juliet for material, but it’s certainly the funniest.  The setting, such as it is, is Victorian London.  Two rival businesses both alike in indignity, one mending shoes, the other making keys, give rise to a pair of young lovers.  You know the rest – or you might think you do.  The plot takes a few swerves along the way to its resolution: the union of the two families and the formation of the High Street business we all know, the shop where you can get your shoes mended and your keys cut.  Yes, this is the world of the Montashoes and the Keypulets.

Writer-director-performer Sam Cochrane, the driving force behind the project, comes and goes as a range of characters, from a talking portrait to a winsome maid.  He is aided and abetted by versatile maniac Alex Prescot, who seems indefatigably energetic in his quickly-changing portrayals, in an irresistible performance.  I fell for him at once.

James Stirling is bluffly bombastic as Master Keypulet, the Machiavellian patriarch, contrasting with Susan Harrison’s diminutive dipsomaniac Lady Montashoe.  Madeleine Gray is hilariously histrionic as Monty, the Romeo figure, while Sabrina Messer’s Keeleigh (the Juliet) is simply sublime.  Messer can belt out heartfelt numbers and then within the space of a semiquaver, drop into a deadpan aside, forever undermining any emotive content the show might have.  She is delightful, to put it mildly.

It’s a good job there is no scenery to speak of, because this lot would be chewing it.  The acting style is over-the-top-and-a-half, the jokes come thick and fast.  Even the songs are laced with daftness with the onstage trio of musicians (Sophie Walker, Dan Hester and MD Lewis Bell) joining in proceedings.  Those songs, with lyrics by Sam Cochrane and Chris Baker, and music by Tom Slade and Theo Caplan, cover a range of styles and are all fabulously entertaining.  They are performed with gusto by the cast – even the choreography, by Ellie Fitz-Gerald is bloody silly. And they all keep instep!

This tale of cobbler meets key-maker is cutting edge (heh) and performed with sole (heh heh) and is a shoe-in to get tongues wagging.  This show has the power to heel… I’ll stop now. 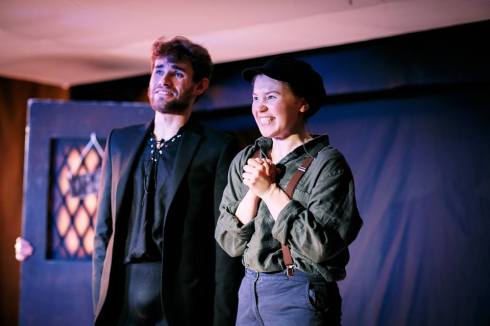