They’re back!  Fat Rascal Theatre, who gave us Beauty & The Beast – a Musical Parody, the funniest show of last year, bring their new comedy musical to town, and it’s a cracker!

It’s an origin story: we witness the transformation of humble tax-office worker Bryony Buckle into a superhero for our time.  With High Wycombe serving as Metropolis or Gotham City, the fast-paced fun involves an evil plan to rid the town (and then, the world!) of gender equality.  Bryony, like other women, is injected by the local doctor, but on her way home, a well-timed bolt of lightning endows her with supernatural powers: strength, flight, the ability to talk with her cat… Dubbed ‘Vulvarine’ Bryony and her workmate Poppy, uncover the plot of the evil Mansplainer and many comic-book capers ensue.

In the title role, Allie Munro is an absolute hoot as the bespectacled and gauche Bryony learns to have confidence in her newfound abilities.  Katie Wells lends enthusiastic, nerdy support as sidekick Poppy, while Robyn Grant’s mad scientist Mansplainer is a grotesque super-villain, all but chewing the scenery.  Jamie Mawson is great as Lois Lane-figure Orson Bloom, awkwardly trying to establish a relationship with Bryony and distracted by the more assertive Vulvarine; and there is a hilarious turn from Steffan Rizzi as Sonya, wife to the villain.  Where Grant goes gloriously over the top in her gender-swapped role, Rizzi is more subtle in his, creating an amusing portrayal without caricature or parody and yet is still very funny.

Grant also wrote the book, giving it a satirical edge and plenty of good old British smut and double entendres.  The songs, composed by James Ringer-Beck with witty lyrics by Daniel Foxx and Grant, are tuneful, adhering to musical theatre convention with a lightness of touch and some fun choreography by Jed Berry.  This is a show that makes a virtue of its small scale production: the special effects are hilariously low-budget (like the hairdryer that enhances Vulvarine’s flying) and there is a lot of humour to be derived from the knockabout staging and the relentless energy of the five talented performers.

The show makes its points without being preachy.  Feminism can be funny and also self-deprecating, it turns out.  The whole thing is infused with irresistible charm and silliness with an undercurrent of being very clever indeed.  Robyn Grant is some kind of genius, I think, and not the evil kind.

Having a female superhero is no less effective, no less daft, than having male ones.  Given the recent outcry from man-babies over the gender-swapping of Captain Marvel, this show could not be timelier. 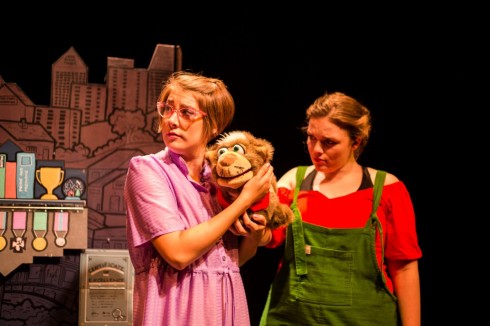 Allie Munro as Bryony Buckle with Elton the cat (Robyn Grant has a hand in him too!)

Novelist (Brough & Miller, sci fi, historical fantasy) Theatre critic http://williamstaffordnovelist.wordpress.com/ http://www.amazon.co.uk/-/e/B008AD0YGO and Actor - I can often be found walking the streets of Stratford upon Avon in the guise of the Bard! END_OF_DOCUMENT_TOKEN_TO_BE_REPLACED
This entry was posted on Friday, March 22nd, 2019 at 8:08 am and tagged with Allie Munro, Birmingham, Daniel Foxx, Fat Rascal Theatre, James Ringer-Beck, Jamie Mawson, Jed Berry, Katie Wells, Old Joint Stock, review, Robyn Grant, Steffan Rizzi, Vulvarine and posted in Review, Theatre Review. You can follow any responses to this entry through the RSS 2.0 feed.
« Fare Play
Having a Nose Around »

One response to “Wise Cracks”