MUCH ADO ABOUT NOTHING

This co-production between the New Vic and Northern Broadsides sets Shakespeare’s quintessential rom-com in post-war Britain, in the North Country.  The war is just over and the country’s in a partying mood.  And so Don Pedro and his entourage arrive at Leonato’s house, dressed in the uniforms of the period, while the womenfolk are dressed as land girls.  The actor-musicians get us ‘in the mood’ with some Andrews Sisters harmonies and jazzy arrangements, courtesy of Rebekah Hughes.

The plot comes to a head in a powerful church scene and what has been a delightful comedy up to now becomes searing drama.  Director Conrad Nelson manages the change of tone expertly – so even if you know what’s coming, we share the shock of the characters.  Claudio’s rejection of the supposedly unfaithful Hero, Leonato’s bitter shame at the public scandal, Hero’s stunned silence and heartfelt pleas of innocence… It’s cracking, eye-watering stuff and having proved themselves deft with witty comedy, the cast come into there own with the more emotional stuff.  Special mention here to Simeon Truby for his devastated Leonato.  And there’s more to comeL  Beatrice and Benedick, alone together for the first time since they have been tricked into believing they are in love with each other, swap declarations and promises.  Suddenly, it’s life and death stuff.  It’s dizzying writing from old Shakespeare, and it’s played to the hilt.

The problems of the witty elite are solved by the hapless intervention of an underclass, the local Watch, whose bumbling makes Dad’s Army look like a crack unit.  Their leader Dogberry (David Nellist) mangles the language with malapropisms, while Anthony Hunt’s spiv of a Borachio makes a convincing transition from bragging to repenting.

Choreography by Beverly Norris-Edmunds keeps the party atmosphere going, with energetic period moves, and there is some lovely a capella singing at key points.  Sigh No More, Ladies works excellently as a bit of barbershop quartet.

This is a wonderful feelgood production that also puts us through an emotional wringer.  Performed by a superlative company, directed in a manner that maximises the comic and the dramatic elements, and serving as a testament to Shakespeare’s genius, this is a Much Ado to savour. 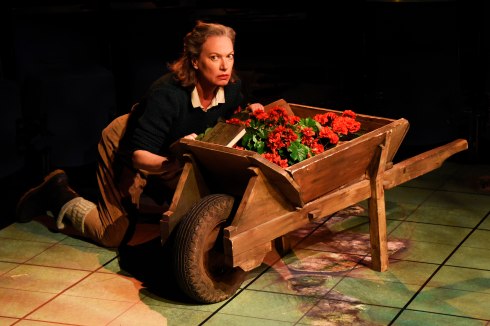 Novelist (Brough & Miller, sci fi, historical fantasy) Theatre critic http://williamstaffordnovelist.wordpress.com/ http://www.amazon.co.uk/-/e/B008AD0YGO and Actor - I can often be found walking the streets of Stratford upon Avon in the guise of the Bard! END_OF_DOCUMENT_TOKEN_TO_BE_REPLACED
This entry was posted on Friday, February 15th, 2019 at 8:32 am and tagged with Beverly Norris-Edmunds, Conrad Nelson, Isobel Middleton, Linford Johnson, Matt Rixon, Much Ado About Nothing, New Vic Theatre, Newcastle under Lyme, Northern Broadsides, Rebekah Hughes, review, Richard J Fletcher, Robin Simpson, Sarah Kameela Impey, Simeon Truby, William Shakespeare and posted in Review, Shakespeare, Theatre Review. You can follow any responses to this entry through the RSS 2.0 feed.
« Lest We Forget…
Odd Couples »