DI AND VIV AND ROSE

Three very different young women meet at university in the 1980s, share a student house for a couple of years, and then strive to keep in touch as their lives take them in different directions.  That’s the plot of Amelia Bullmore’s play, written and first produced in 2013.   With the action spanning thirty years, there are plenty of costume changes and music cues to convey the passage of time.  Video projections, by Kristan Webb, identify locations, with sketches supposedly taken from art history student Rose’s sketchbook.

As middle-class, promiscuous Rose Katie Merriman is hilarious, adding physical comedy to her characterisation.  Rose having trouble walking and sitting after an evening with the well-endowed Casper is a scream.  Rose might be a bit of a sheltered, spoiled Southerner, but Merriman brings her great warmth.

Tiffany Cawthorne portrays sporty lesbian Di with youthful vigour and bright-eyed enthusiasm – until events bring out darker emotions.  Bullmore’s writing gives us broad humour and delicate, sensitive scenes.  Cawthorne handles everything the script requires of her with skill and conviction.

Completing the trio is Liz Plumpton as oddball Viv, who spends her student days dressed ‘like it’s the War’ and is not shy of deconstructing events with sociological analysis.  Her militant intellectualism is in direct contrast with good-time girl Rose’s outlook; sparks fly between the two of them, which serve to deepen the bond between them.  Plumpton is superb as the slightly dour, dry-witted Viv. It takes a tragic event to bring Viv to the boil in powerful scenes, and it’s all the more moving because of her previous behaviour.

It’s a warm-hearted, very funny piece.  Director Kevin Middleton handles the sea changes of the women’s lives, navigating the differences in tone with subtlety and the broader comedic moments with splendid timing.  There are some pacing issues with some of the transitions: scenes divided into snappy sub-scenes need quicker changes; there are too many slow fades to black, when these should be reserved for the changing of the years.  But this is a minor quibble in an otherwise excellent production.  The depth and range of emotion depicted here raises the story beyond the realms of chick-lit.  It’s an examination of the bonds of friendship: the fun to be had, the closeness, the sense of belonging, as well as the bitterness and sense of disappointment when life gets in the way.

Laugh-out-loud funny and ultimately very moving, this is a fine production of a powerful play, and it makes me wish Amelia Bullmore was more prolific! 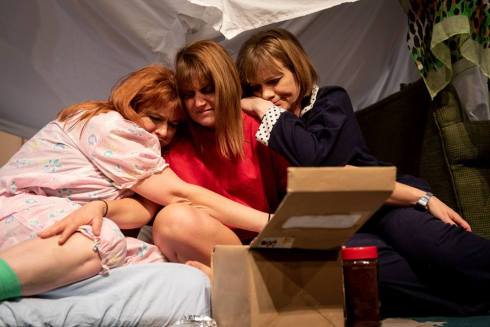 Novelist (Brough & Miller, sci fi, historical fantasy) Theatre critic http://williamstaffordnovelist.wordpress.com/ http://www.amazon.co.uk/-/e/B008AD0YGO and Actor - I can often be found walking the streets of Stratford upon Avon in the guise of the Bard! END_OF_DOCUMENT_TOKEN_TO_BE_REPLACED
This entry was posted on Sunday, February 10th, 2019 at 10:34 am and tagged with Amelia Bullmore, Birmingham, Crescent Theatre, Di and Viv and Rose, Katie Merriman, Kevin Middleton, Liz Plumpton, review, Tiffany Cawthorne and posted in Review, Theatre Review. You can follow any responses to this entry through the RSS 2.0 feed.
« Intoxicating
Chilling at Home »