A Tern for the Better

Chekhov done right is hugely demanding of any company attempting to stage one of his plays.  But if the company does get it right, the play becomes less demanding on the audience and, in fact, becomes a pleasure.  Here, director Andrew Brooks gets it right, eliciting nuanced and rounded performances from his cast, in this enjoyable adaptation by Christopher Hampton.

Jacob Williams shines as neurotic young writer Konstantin Gavrilovich Triplev – (the main problem I have with Chekhov is the names.  Sometimes characters use the full name, a diminutive version, or a different name altogether, so it can take a while to sort out in your mind who they’re talking about!)  Williams seems effortlessly naturalistic, balancing Kostia’s jaded outlook and insecurities with passion for the theatre.  Konstantin’s descent into mental illness is expertly portrayed.

As his mother, Irina So-and-so and Such-and-such, Karen Leadbetter gives us the ego of the famous actress, her insensitivity and selfishness – all at Konstantin’s expense – in a measured performance that never goes over the top.  John O’Neill is more down-to-earth as her lover, celebrated writer Trigorin; he really comes into his own when Trigorin describes the writer’s lot.

The object of Konstantin’s affections, the tragic Nina is played by Hannah Birkin, who is marvellous in the part.  She even performs the pretentious twaddle of Konstantin’s play with conviction.  This is a story of unrequited love – most of the characters are afflicted by it, setting off a chain reaction of events.

Dave Hill is endearing as ailing Uncle Pyotr, while the mighty Colin Simmonds perfectly inhabits his role as the family doctor.  Amy Thompson is the picture of misery as the lovelorn Masha, and Papa Anoh Yentumi gives an assured performance as pipe-smoking Shamrayev.

The costumes by Pat Brown clearly depict the class structure of 1895 Russia, and the beautiful set by Keith Harris and Megan Kirwin, with its tree trunks and elegant furnishings, basks in the atmospheric lighting of Kristan Webb’s design.  This is a classy production of a classic play, which brings out most of the humour inherent in the text with credible characterisations that keep on the right side of melodrama.

Eminently watchable and entertaining, this is one Chekhov you really ought to check out. 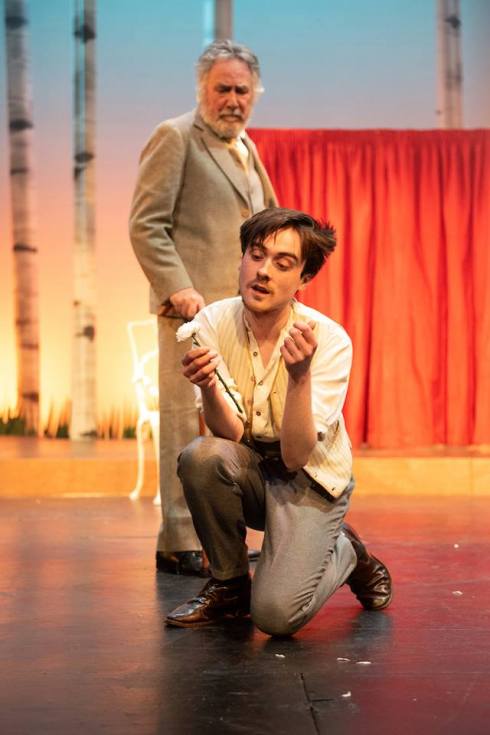 Novelist (Brough & Miller, sci fi, historical fantasy) Theatre critic http://williamstaffordnovelist.wordpress.com/ http://www.amazon.co.uk/-/e/B008AD0YGO and Actor - I can often be found walking the streets of Stratford upon Avon in the guise of the Bard! END_OF_DOCUMENT_TOKEN_TO_BE_REPLACED
This entry was posted on Sunday, February 3rd, 2019 at 9:36 am and tagged with Amy Thompson, Birmingham, Chekhov, Colin Simmonds, Crescent Theatre, Dave Hill, Hannah Birkin, Jacob Williams, John O'Neill, Karen Leadbetter, Keith Harris, Kristan Webb, Megan Kirwin, Papa Anoh Yentumi, Pat Brown, review, The Seagull and posted in Review, Theatre Review. You can follow any responses to this entry through the RSS 2.0 feed.
« If I Had a Hammer
Squid Pro Quo »