If I Had a Hammer

MISTRESS TO THE MIDNIGHT

Do you remember the classic British horror film made by Anvil Studios, Mistress of the Midnight?  No, of course you don’t because the film never existed and neither did the studios.  This hilarious production begins with the premise that the fictitious film has been found and, for the first time in sixty years, is going to be shown to a discerning public, namely the members of the ‘Sinema Society’.

This funny introduction sets the tone – this is the clever, silly kind of humour that reminds me of the heydays of Radio 4 comedy shows – and with only three performers, fast-moving action and even faster quick changes are the order of the day.

The ‘film’ begins with a cod-Victorian English voiceover, as our protagonist Ned Hellion, a kind of Jonathan Harker figure, writes home to his fiancée.  He has been summoned abroad to a weird Germanic country to conduct some legal business on behalf of the mysterious Madame Zozanov.  He encounters a host of colourful characters, and the tropes and atmosphere of the genre are laid on with a trowel – or should that be a Hammer?

It’s an absolute scream!  This kind of thing is right up my dark alley.  A gag-packed script delivered by a talented trio whose heightened performances sell even the lamest of jokes and make meals of the more melodramatic moments.  And, surprisingly, it’s a bit creepy too. Despite the silly wigs, the funny voices, the ridiculous vocabulary of the locals, and the far-fetched nature of the subject matter, there is the odd moment when the pace slows and the eeriness seeps through.

But not for long!  For most of the sixty minutes duration, you will be laughing out loud, relishing the daftness and loving the performers.  Written and performed by Jacob Lovick, Jack Robertson and Chazz Redhead, this glorious piece took me back to my childhood when stopping up late to watch a Hammer double-bill was a delicious treat. 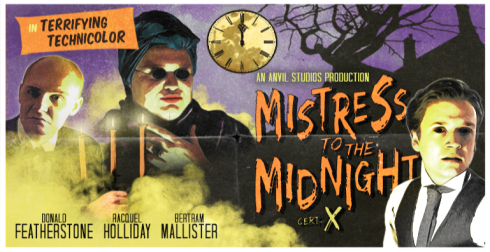 Novelist (Brough & Miller, sci fi, historical fantasy) Theatre critic http://williamstaffordnovelist.wordpress.com/ http://www.amazon.co.uk/-/e/B008AD0YGO and Actor - I can often be found walking the streets of Stratford upon Avon in the guise of the Bard! END_OF_DOCUMENT_TOKEN_TO_BE_REPLACED
This entry was posted on Saturday, February 2nd, 2019 at 7:55 am and tagged with Birmingham, Chazz Redhead, Jack Robertson, Jacob Lovick, Mistress to the Midnight, review, The Old Joint Stock and posted in Review, Theatre Review. You can follow any responses to this entry through the RSS 2.0 feed.
« Best Case Scenario
A Tern for the Better »