The festive offering at the Blue Orange this year is a trilogy of tales, familiar stories with a twist.  Performed by a talented ensemble of five, the stories comprise an entertaining anthology, suitable for all the family.

First up is Rapunzel, directed by Oliver Hume, setting the tone and the style.  The actors share narration and adopt a larger-than-life style that’s not quite panto, but not far off.  For the most part, they play it straight, even though the script is witty.  Hume’s staging is deceptively simple; there’s some sophisticated storytelling going on here.

Simon Ravenhill’s Little Red Riding Hood (directed by Marcus Fernando) is a more overtly comic, almost cartoonish affair, with heightened physicality and even some chasing around with Yaketty Sax blaring out!

Finally, we have Mark Webster’s Rumpelstiltskin, a return to the style of the opener but with added atmosphere: cast members remain onstage, supporting the main action – like the spinning of the straw, for example.

The stories are performed by a fine quintet.  James Nicholas is wonderful as a high-camp Witch, a rather butch Granny, and a splendidly creepy Rumpelstiltskin.  Adam Simmons is appealing as Rapunzel’s Prince, perfectly arrogant as the avaricious, gold-hungry Prince, and charming as a Narrator.  Alan Nikitas delivers long-suffering peasants and fathers, but really shines as an exasperated Big Bad Wolf that is a real treat to see.  Rebecca Ross supports as mothers, guards, and is especially good fun as a felonious Goldilocks, menacing all who cross her path.  Playing the heroines in all three stories, Stephanie Grey delights as the imprisoned princess, the put-upon Gretchen, and especially as a garrulous Little Red Riding Hood.

The action is slick, engaging and funny.  The adaptations are clever enough to amuse the adults, and the lure of the original stories still has the power to enchant and enthral the children.

Perfectly charming and thoroughly enjoyable, this is a production that will hold you in its spell, and it’s all rounded off with a sweetly sung rendition of Auld Lang Syne.  Glorious rather than grim. 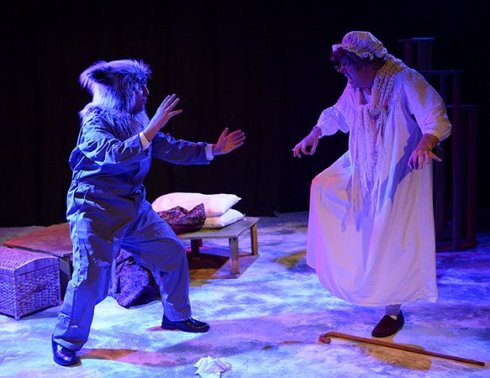