Birmingham’s Hippodrome theatre can be counted on to stage the biggest, brightest pantomime year after year and this year is no exception.  Peter Pan is a bit of a weird one, as pantos go, because we expect to see certain key plot points from the J M Barrie play along with traditional panto elements as befit the format.  There is no wedding celebration at the end, for example, because there is no couple of lovers; in fact, Peter and Wendy’s story ends with separation.  Bit of a downer, there, Mr Barrie.

Other than that, it is quite a good fit in this adaptation for the pantomime stage by Alan McHugh and director Michael Harrison.  Big, bold and extravagant, the Hippodrome panto is the jewel in the Qdos crown, but it doesn’t matter how much money you chuck at the stage, it doesn’t matter how big the Wow factor is, if the show doesn’t have any heart.

Rest assured, heart is not in short supply either, thanks to a superlative cast.

Back for his sixth year on the trot, funnyman Matt Slack almost dominates proceedings as Mr Smee.  With Slack, you know exactly what you’re getting, and you’re delighted to get it.  There is nothing slack about his comedic skills: a bit rude, a lot daft, and with exquisite timing.  His impressions are always impressive too.

Union J’s Jaymi Hensley is practically perfect as Peter, with his boyish good looks and angelic pop vocals.  I could listen to him all night.

Cassie Compton makes an earnest Wendy, while Kellie Gnauck is an appealingly bratty Tinker Bell.  Meera Syal brings local colour to the show in her pantomime debut as the Magical Mermaid and is clearly enjoying herself immensely.  There are old-school variety acts courtesy of the remarkable Timbuktu Tumblers and a gravity-defying balancing act called the Drunken Pirates (Sascha Williams and his assistant Stephanie Nock).

The flying effects are as you’d expect but there are also some surprises.  Most impressive of all is the Crocodile, whose terrifying appearance brings the first act to a close.  Truly, the best I have seen.

The coup though is the casting of not-so little Jimmy Osmond in the role of Captain Hook.  Osmond is the embodiment of entertainment and one of those rare creatures, an American who gets pantomime.  He establishes an excellent rapport with Slack, the straight guy to the latter’s buffoonery, and he treats us with several songs from his brothers’ repertoire, for a rousing finale.

This spectacular affair is a lot of fun.  The comic song, If I Were Not in Neverland, brings the house down, and Slack’s handling of the four youngsters who come up on stage for the sing-along is always a highlight.

One thing I will say: the show could do with a wider range of costumes.  Captain Hook especially deserves an extensive wardrobe, and in the absence of a dame, the Magical Mermaid could do with some more outlandish outfits.

But never mind that.  This is a top-drawer production, an awfully big adventure that is hilarious and magical, demonstrating that what matters most of all is casting.  Get that right and everything else is a bonus. 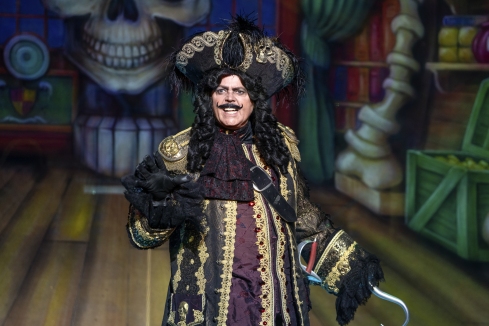 Hooked on a feeling: Jimmy Osmond

Novelist (Brough & Miller, sci fi, historical fantasy) Theatre critic http://williamstaffordnovelist.wordpress.com/ http://www.amazon.co.uk/-/e/B008AD0YGO and Actor - I can often be found walking the streets of Stratford upon Avon in the guise of the Bard! END_OF_DOCUMENT_TOKEN_TO_BE_REPLACED
This entry was posted on Friday, December 21st, 2018 at 1:07 am and tagged with Alan McHugh, Birmingham Hippodrome, Cassie Compton, Jaymi Hensley, Jimmy Osmond, Kellie Gnauck, Matt Slack, Meera Syal, Michael Harrison, pantomime, Peter Pan, review, Sascha Williams, Stephanie Nock, The Timbuktu Tumblers and posted in pantomime, Review, Theatre Review. You can follow any responses to this entry through the RSS 2.0 feed.
« Getting into the Spirit
The Princess and the Proon »