Panto’s cheekiest duo, Jonathan Wilkes and Christian Patterson, are back – of course, they’re back – with another hilarious madcap extravaganza.  The Robin Hood legend is merely a framework on which to hang the customary pantomime shenanigans, although there is some semblance of a plot with the archery contest for the golden arrow, and King Richard returning from the Crusades.

In the title role, Jonathan Wilkes with his schoolboy impertinence and his pleasant pop-star vocals is an irresistible lead.  The home crowd that turn out in their droves to support him know what to expect, and we lap it up.  Long-time confederate (ten years and counting) Christian Patterson starts off as a cheery, ruddy-cheeked Friar Tuck, getting up to monk-y business.  The funniest moments of the show are whenever these two are on together, and the script contrives to keep them on together for as much as possible.  Tuck, to distract the Sheriff, becomes a pantomime dame and opts to stay in drag for the rest of the show.  Tuck by name…

As the Sheriff of Stokingham, the mighty Kai Owen is enjoyably sneering, spouting insults at the audience, looking like a cross between Lawrence Olivier’s Richard III and Claudia Winkelman.  Finley Guy is an appealing, perky Maid Marian, who can give better than she gets in a sword fight with the baddie.  This is just one of the production’s progressive elements, showing that female characters can be pro-active too.

Another welcome step is the inclusion of an openly gay character in the handsome form of Delme Thomas’s Will Scarlett.  He could not be more camp, but the character is never ridiculed or belittled; he is accepted, included and valued, and that is very pleasing to see.  Thomas commits to his high-camp characterisation and can ad lib with the best of them and sing like a dream.

Peter Bonner’s Little John lives up to his name.  He’s a charming stage presence and a great sport.  There are plenty of jokes at the expense of his diminutive stature, good-natured ribbing this may be but perhaps we will see a move away from this kind of humour too…

The good fairy role is played by Rebecca Lisewski as the Spirit of Sherwood, combining fairy-tale glamour with a down-to-earth manner.  Her singing voice is the best of the bunch and she gets to really let rip in the finale with a rousing rendition of This Is Me.

As ever, the choreography, by Nikki Wilkes and James Bennett, is superlative, performed by an attractive ensemble that contains some acrobatic men.  The crowd is augmented by kids from the Wilkes Academy of Performing Arts.   The songs are well-known and sing-along-able and some of the jokes are tell-along-able.  Inclusion really is the watchword here!

There’s an impressive 3D sequence (the graphics in these things have definitely improved) along with traditional moments (a song-sheet, kids on stage, a stalking ghost…)  The almost-obligatory Twelve Days of Christmas rapidly descends into chaos, and you might think the whole enterprise is just silly, knockabout fun, and indeed Wilkes and Patterson give the impression that it’s all slapdash.  Well, slick it certainly isn’t – on the surface, at any rate.  Patterson’s direction masks the professionalism beneath the giggles.  There is a gobsmacking Play-That-Goes-Wrong moment, which I won’t give away, but it makes you realise these guys know exactly what they’re doing.

The laughs keep coming in this warm-hearted, who-farted, romp.  It’s like catching up with old friends and having a cracker of a night out.  A feast of fun, I advise you to Tuck in. 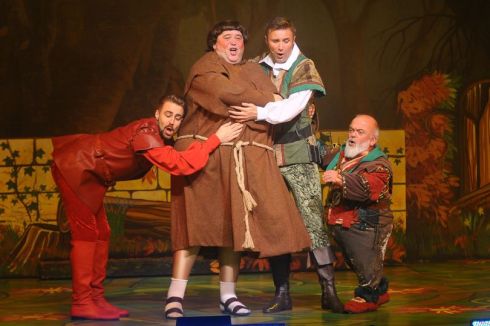 Novelist (Brough & Miller, sci fi, historical fantasy) Theatre critic http://williamstaffordnovelist.wordpress.com/ http://www.amazon.co.uk/-/e/B008AD0YGO and Actor - I can often be found walking the streets of Stratford upon Avon in the guise of the Bard! END_OF_DOCUMENT_TOKEN_TO_BE_REPLACED
This entry was posted on Saturday, December 15th, 2018 at 9:11 am and tagged with Christian Patterson, Delme Thomas, Finley Guy, James Bennett, Jonathan Wilkes, Kai Owen, Nikki Wilkes, pantomime, Peter Bonner, Rebecca Lisewski, Regent Theatre, Robin Hood, Stoke on Trent and posted in pantomime, Review, Theatre Review. You can follow any responses to this entry through the RSS 2.0 feed.
« Finger-Prickin’ Good
Getting into the Spirit »