Based on the film of the same name, the hit musical with book by Harvey Fierstein and songs by Cyndi Lauper hits the road for its first national tour.  Having enjoyed the movie and being well aware of the show’s West End reputation, I take my seat with eager anticipation.

It’s the story of Charlie, a young man who feels trapped into taking over his father’s shoe factory after the old man pops his clogs.  Times are hard and it seems that lay-offs and a shutdown are inevitable.  Staff are facing the boot.  Unless, a new kind of product can be found…

At first, it seems a bit humdrum and run-of-the-mill.  Like a new pair of shoes, it takes a while to wear in.  By the time queen of the drag queens Lola appears, things lift and stay lifted.  Lola (played exquisitely in this performance by Kayi Ushe) gets all the best tunes and all the best lines.  Ushe is utterly captivating, dignified, strong and vulnerable, and sassy to perfection.

The factory shifts production to the manufacture of boots for drag queens, designed by Lola, and the plot shifts from saving the factory to include the growing friendship between the two leads, Charlie and Lola (most definitely NOT the Cbeebies pair!)

As Charlie, Joel Harper Jackson is not without intensity but tends to get a bit shouty in his big musical moments.  Other than that, though, he and Ushe are a great match, their voices blending beautifully in the searing ballad, Not My Father’s Son.  Among the factory workers, there is strong support from Paula Lane as the smitten Lauren, and Demitri Lampra as Don, the embodiment of outdated toxic attitudes – a crowd favourite here in Wolverhampton.  Adam Price is also a lot of fun as middle-aged George.

The chorus of ‘Angels’ – Lola’s drag queen friends – is stunningly glamorous and camp – and agile too.  Jerry Mitchell’s choreography shows off their assets in the best possible light.  Mitchell also directs, balancing a down-to-earth, East Midlands flavour with showbiz glitz.  There are plenty of laughs here and a lesson in acceptance to boot, a recognition of the humanity behind the falsies or indeed the attitudes the characters present to the world.  You can’t help leaving the theatre feeling six inches taller.

If you’re looking for the best musical set in Northampton, this one’s a shoe-in.  A real feelgood show which, dare I say it, has heeling properties.  And the music has sole… I’ll stop now. 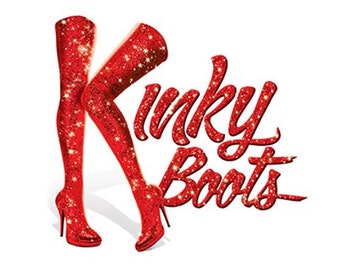 Novelist (Brough & Miller, sci fi, historical fantasy) Theatre critic http://williamstaffordnovelist.wordpress.com/ http://www.amazon.co.uk/-/e/B008AD0YGO and Actor - I can often be found walking the streets of Stratford upon Avon in the guise of the Bard! END_OF_DOCUMENT_TOKEN_TO_BE_REPLACED
This entry was posted on Thursday, October 18th, 2018 at 10:38 am and tagged with Cyndi Lauper, Demitri Lampra, Grand Theatre Wolverhampton, Harvey Fierstein, Jerry Mitchell, Joel Harper Jackson, Kayi Ushe, Kinky Boots, Northampton, Paula Lane, review, tour and posted in Review, Theatre Review. You can follow any responses to this entry through the RSS 2.0 feed.
« Bolly Good Show
Going off the Handel »