Every summer about a hundred young people flock to Birmingham and just a fortnight later, they’re performing to packed houses.  It’s the Alex’s annual Stage Experience project, a highlight of the theatre’s calendar.  Previous shows include 42nd Street, Footloose, and West Side Story.  This year the choice is Boogie Nights, a jukebox musical of 1970s hits with a plot so shallow it makes Dreamboats & Petticoats seem like The Cherry Orchard.   This is Saturday Night Fever lite, with characters living for their nights out at the local nightclub, and there’s a party atmosphere long before the performance begins with cast members in the aisles encouraging the audience to get up and dance.

The miracle worker, as ever, is the indefatigable Pollyann Tanner who directs and choreographs her huge cast of youngsters with an assured hand.  It can’t be easy managing such a troupe but the enthusiasm of every member shines through – this lot clearly don’t need cattle-prods to get them to cooperate!  I can’t list them all, so forgive me, chorus, for focussing on the main players.

Leading the cast is Elliot Gooch as Roddy, our narrator.  Gooch has presence and a twinkle in his eye, but Roddy is written in such a way, we can’t be charmed by his throwaway sexism and his selfishness.  Gooch works hard to sell the character to us, but ultimately Roddy is an obnoxious plonker.  As Roddy’s long-term girlfriend Debs, Isabella Kibble positively shines in a flawless performance.  She can handle the London-ish accent superbly and sings like a dream.  Furthermore, she brings credibility to the part and is the emotional centre of the piece.  Kibble is supported by Melissa Huband as best friend Trish, who also sings well and displays spot-on comic timing.

Grace Williams also makes a strong impression as night-club singer Lorraine.  Her duet with Debs (No More Tears/Enough is Enough) is a definite highlight.

Among a colourful array of Seventies costumes, Gibsa Bah looks marvellous as Spencer, strutting on huge platforms with an afro like a black cloud over his head, whose chauvinistic attitudes remind us that the period was not just great pop music and big collars.  Thomas Parkinson adds humour as Roddy’s mate Terry, while handsome Jonah Sercombe has the best male singing voice of the lot – it’s a shame we don’t get to hear more from him – but I would advise him not to rush his dialogue, and please, someone get him a wig to hide his on-fleek 2018 hairdo!  There is an excellent performance from Liam Huband as Roddy’s Elvis-worshipping father, Eamon – a strong characterisation, Eamon gets most of the best lines (even if Jon Conway’s script strings together as many old jokes as old songs).

The songs keep coming (and coming) along with gratuitous period references to crank up the nostalgia factor.  A tight ensemble led by Musical Director Chris Newton provides a great sound, and you can’t resist the energy coming off the stage.  More of a party than a play, this show’s delights come from seeing young people giving it their all, rather than getting their teeth into a meatier piece of musical theatre. 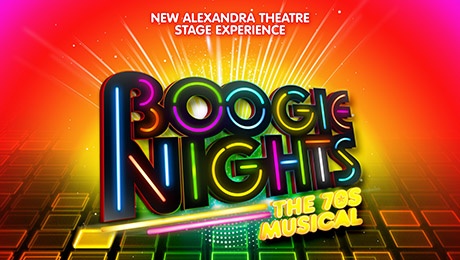