TURN OF THE SCREW

Henry  James’s classic ghost story is often cited as an inspiration for Susan Hill’s The Woman In Black – and  in this masterful new stage adaptation by Tim Luscombe, you can see why.  A stranger arrives at a lonely mansion, there is mystery about dark deeds of the past, and apparitions stalk the scene…  Where the James differs from the Hill is the emphasis is on the psychological aspects.  It’s a slow-burner and we’re never sure if the ghosts are ‘real’ or figments of the imagination of the young Governess (Carli Norris).  Freud would probably say the apparitions are manifestations of the young woman’s repressed sexuality – she did take a fancy to her dashing employer (Michael Hanratty) before he dashed off, and indeed the action that suggests the show’s title, a young girl twisting a mast into a toy ship, triggers one of the Governess’s episodes… Also, having the same actor portray all the male roles supports the idea of her fixation on her employer, the uncle of her two charges. 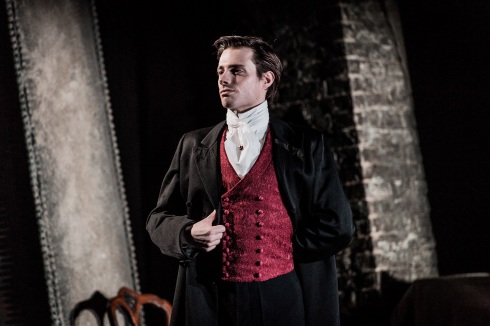 Carli Norris is splendid as the composed, older Governess, come to attend an interview.  As her story unfolds and she becomes her younger self,  she is driven to distraction by events.  Her interviewer is spirited and commanding, and in the flashbacks becomes young girl Flora, energetic to the point of exhausting, in a highly effective performance by Annabel Smith.  There is some steady character work from Maggie McCarthy as the lowly Mrs Grose, lending bags of atmosphere to the piece, and in the male roles Michael Hanratty demonstrates his versatility and magnetic presence – especially as young boy Miles who has been expelled from school for unmentionable reasons.

Director Daniel Buckroyd builds the intrigue, punctuating the storytelling with moments geared up to jolt or cause a shiver.  Sara Perks’s set keeps things simple: covered furniture becomes landscape, for example, so the one location – the Governess’s room (or her mind, depending on how you look at it) – serves for all.  Matt Leventhall’s lighting makes excellent use of side-lighting, giving the characters a dramatic, almost statuesque, appearance, and John Chambers’s compositions and sound design underscore the action to an unsettling degree.

This is a classy, stylish and captivating production, made in conjunction between Dermot McLaughlin Productions, Mercury Theatre Colchester and Wolverhampton’s Grand – it’s especially gratifying to see the latter extending its reach into producing new work.  Bravo, the Grand!