Welsh National Opera is back in town and this time they’ve brought my favourite opera, Mozart’s masterly take on the Don Juan legend.  The setting is dark: huge slabs hold doorways (which are put to comic use) but also bear reliefs, friezes depicting human figures in a variety of poses.  Are they souls in torment, and a foretaste of what awaits this dissoluto when he is punito?  Or are they souls in love – which, as the opera demonstrates (in case we didn’t know already) brings its own kind of torment?  These huge pieces, further adorned with statuary, speak of a dominant power, of a ruling class imposing its will on the environs.  Which is what Don Giovanni does in spades, of course, under the guise of generosity and general benevolence.  In these days of sexual harassment cases brought against those (men) who abuse their positions of power, the opera takes on a sharp and contemporary relevance, although I doubt the likes of Weinstein will face his comeuppance via supernatural means!

Against this darkness and walls closing in and moving back, plays out the drama and the comedy of Lorenzo da Ponte’s libretto.  Melodrama is countered with wit, high emotion with low, physical gags.  Mozart’s music ties all the mood swings together so we are aware of the contrasts but don’t see the join, and this revival of John Caird’s production serves all aspects, every change of tone, very well.

Gavan Ring’s swaggering Giovanni certainly looks the part and uses his baritone well for seductive decoration.  It’s a pity his voice comes across as somewhat underpowered when singing against the full orchestra: the champagne aria is a bit of a damp squib, alas, whereas La Ci Darem is delicious.  His serenade of Elvira’s maid is ‘accompanied’ by a mysterious, cowled figure, supposedly on the mandolin, thereby aligning Giovanni with the supernatural forces that crop up throughout.  This is the one production choice I query.  If Giovanni is in league with these forces and therefore doing the devil’s work, it doesn’t quite gel with his damnation, brought about by the spirit of the man he murders in the opening scene… Oh well.  I’m not going to let it ruin my night.

David Stout’s Leporello is instantly likeable.  He has the cockiness, the cheekiness and the grovelling down pat, and plays the comedy to the hilt.  Meeta Raval’s Donna Anna provides most of the high drama, while Elizabeth Watts’s Elvira’s melodramatic turn also contributes to the laughs.  Watts is arguably the best actor of this impressive ensemble; her wide-eyed Elvira, like the opera as a whole, balances the dramatic with the comic.  She is a drama queen.  Gareth Brynmor John gives us a solid hothead in his Masetto, while Katie Bray is sweet, funny and charming as his wayward fiancée, Zerlina.  Miklos Sebestyen’s Commendatore is suitably imposing but, for me, best voice of the evening comes out of Benjamin Hulett’s dashing Ottavio.  His tenor soars over the orchestra; his Ottavio is upright, moral and heroic, and not the wet lettuce he is sometimes portrayed as.

The orchestra is in excellent fettle under the baton of James Southall and although the fabulous WNO chorus has little to do, they make an impression with some country dancing at Zerlina’s wedding.

The world is a dark place, the production tells us, and those in charge will seek to exploit us.  Nevertheless, life is to be enjoyed, despite tyrants, despite the tyrannies of love.  At the end, the characters seem unable to embrace life’s pleasures: Anna defers her marriage to Ottavio – who agrees to it! – Elvira heads for a convent – and Leporello seeks out further servitude in a new master.  With Giovanni out of the picture, their lives have lost purpose.  We must allow ourselves a little dissolution, it seems, in order to be happy and fulfilled! 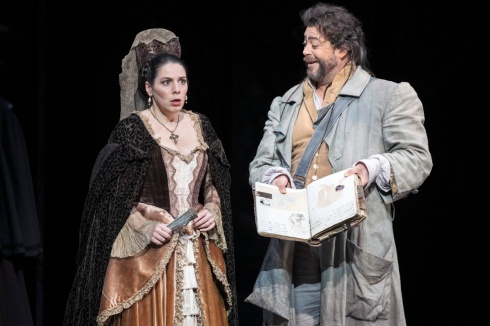 If you have enjoyed this review, why not buy me a coffee?  Cheers!