We all know them, the bores who can spout reams and reams of Monty Python scripts and manage to suck all the humour of it, as if just saying the lines is enough, when what matters, perhaps more than the clever-silliness of the words, is the delivery.  The challenge for any Spamalot cast is to go beyond reciting the familiar lines and aping the original performers.  Yes, we expect certain intonations; yes, we expect men as unconvincing women with squawky voices; and yes, we expect iconic scenes from the film (Monty Python and the Holy Grail, for those not in the know – P.S. Where have you been?) – Show’s creator Eric Idle wisely gives us all of this with plenty of new material to make something fresh, something new, something with its own life.

I say ‘fresh’ and luckily, I still mean it.  This is my fourth visit to the show.  On previous occasions, in the role of King Arthur I’ve seen comedians: Sanjeev Bhaskar, Phill Jupitus, Marcus Brigstocke, each of whom bring much of themselves to the part.  In this touring production from Selladoor, we have an actor, the excellent Bob Harms, who plays his Arthur as a character.  It makes a lot of difference.  Harms has a touch of the Graham Chapman to him, but also a little bit of Rowan Atkinson’s Blackadder, I think; it adds up to a silly, delightful performance, holding the show together.

Harms is supported by equally silly, equally skilful knights.  Johnathan Tweedie’s Lancelot is a ridiculous brute, Norton James’s Galahad transforms from peasant to preening matinee idol; Stephen Arden’s cowardly Sir Robin is a lot of fun, while Mark Akinfolarin’s Sir Bedevere provides a lot of the physical comedy.  Coconut-bearer Patsy (Rhys Owen) nails the show’s most well-known song (Always Look On The Bright Side of Life – filched from Life of Brian, of course).  Sarah Harlington’s scene-stealing Lady of the Lake is magnificent: her vocal skills and parodies are remarkable – the best I’ve heard in the role.  I make special mention of Matthew Pennington, an absolute scream as Prince Herbert, among other roles, but really the comedic skills of the entire troupe are marvellous to behold.

The show is just as much a parody of musical theatre as it is a retelling of the Arthurian legend.  Knowing, self-referential and satirical, the show exposes and celebrates the genre’s conventions, wrapped up in the peculiarly British revelling in silliness the Pythons represent.  Spamalot is Monty Python-lite, lacking the edge, the sense of daring the group had when the Circus first took flight.  There are enough references to the Python oeuvre to satisfy fans, alongside topical allusions that keep the show current.  The show stands as an entity in its own right – I met someone who’d never seen it before, hadn’t seen the film, and she loved it.

And I was more than happy to reacquaint myself with the show’s delights.  Being a touring show, the production is somewhat scaled down (e.g. only two chorus girls) but there is no stinting on talent and fun.  A laugh-out-loud-and-long couple of hours with some great tunes, excellently presented and charmingly daft.  I loved it. 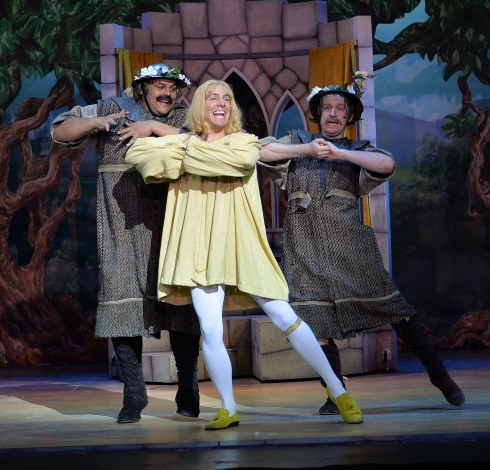 Novelist (Brough & Miller, sci fi, historical fantasy) Theatre critic http://williamstaffordnovelist.wordpress.com/ http://www.amazon.co.uk/-/e/B008AD0YGO and Actor - I can often be found walking the streets of Stratford upon Avon in the guise of the Bard! END_OF_DOCUMENT_TOKEN_TO_BE_REPLACED
This entry was posted on Wednesday, February 28th, 2018 at 9:28 am and tagged with Belgrade Theatre Coventry, Bob Harms, Eric Idle, Johnathan Tweedie, Marc Akinfolarin, Matthew Pennington, Monty Python, Monty Python and the Holy Grail, Norton James, review, Rhys Owen, Sarah Harlington, Spamalot, Stephen Arden and posted in Theatre Review. You can follow any responses to this entry through the RSS 2.0 feed.
« Drama Therapy
Thrilling »