Terence Rattigan’s masterpiece loses none of its powers in this new production directed by Rachel Kavanaugh.  What begins as a charming observation of Edwardian family life soon develops into a drama with far-reaching implications, as the entire nation follows the case of Ronnie Winslow and his struggle to clear his name following a wrongful accusation of the theft of a five-bob postal order.  Or rather, it’s his father’s struggle: only 14 when it all kicks off, Ronnie is able to get on with his life, secure in his father’s love and support.

As the titular Boy, Misha Butler is an instantly appealing presence, fresh-faced and oozing vulnerability.  As his father, Aden Gillett is old-school paternal: his word is law, but he’s also clearly very much a man who loves his family.  We witness Pa Winslow’s physical decline, his resolve wobble as much as his gammy leg, but his belief in his boy never falters, despite the hardship the expenses of pursuing the case inflict on the family. It’s a masterful performance at the heart of this piece.   Tessa Peake-Jones as Ma Winslow is old-school maternal, responding emotionally rather than rationally: it’s a family to which we’d like to belong – especially with chirpy maid Violet (Soo Drouet) fetching and carrying.  Drouet manages to bring more to this rather stock character.

Theo Bamber’s Dickie, the elder son, is a livewire, a voice of dissent and a nifty dancer!  But it is the sister, Catherine (Dorothea Myer-Bennett) who draws most of our attention.  A suffragiste, she is her father’s daughter, forthright and not shy of voicing her opinions, even willing to make sacrifices in her love-life for the cause of clearing Ronnie… Her intended is no great loss anyway; stuffed shirt John (a dapper William Belchambers) lacks the independence of spirit that makes Catherine stand out so markedly.

There is a magnificent turn from Timothy Watson as the superstar barrister hired to fight the case, Sir Robert Morton.  His cross-examination of Ronnie makes for an electrifying scene and his scenes with Catherine are delicious, as they skirt around a whiff of romance.

Kavanaugh directs with a light touch and the cast rattle through Rattigan’s somewhat wordy dialogue at speed, so the witty remarks and emotional exchanges fizz and spark.  It’s an unerringly entertaining piece.  The Winslows taking on the establishment is a David v Goliath campaign but the far-reaching implications I mentioned earlier have remarkable resonance with us today, a hundred years after the time in which the play is set.  Lines about the ‘desperatism of Whitehall’ encroaching on our freedoms could refer to the woeful Brexit negotiations, for example, and with ‘the despotism of bureaucracy’, Rattigan could be describing the Department of Work and Pensions!  And the figure of Catherine could represent the Time’s Up movement as women continue to fight for equality and respect.

More than a comedy (although it is very funny), this is social commentary that hooks us in with likeable characters, an intriguing situation, and bags of tension and suspense.  A flawless production and a real treat. 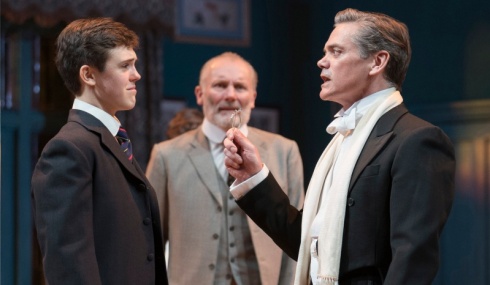 Novelist (Brough & Miller, sci fi, historical fantasy) Theatre critic http://williamstaffordnovelist.wordpress.com/ http://www.amazon.co.uk/-/e/B008AD0YGO and Actor - I can often be found walking the streets of Stratford upon Avon in the guise of the Bard! END_OF_DOCUMENT_TOKEN_TO_BE_REPLACED
This entry was posted on Friday, February 23rd, 2018 at 8:09 am and tagged with Aden Gillett, Dorothea Myer-Bennett, Misha Butler, Rachel Kavanaugh, review, Soo Drouet, Terence Rattigan, Tessa Peake-Jones, The REP Birmingham, The Winslow Boy, Theo Bamber, Timothy Watson, William Belchambers and posted in Theatre Review. You can follow any responses to this entry through the RSS 2.0 feed.
« Nice Hooters
Drama Therapy »

2 responses to “Play to Win”