Everything has a hashtag these days, doesn’t it?  We all remember the #JeSuisCharlie one used as a show of solidarity after the shootings at the Charlie Hebdo magazine office in Paris.  But other atrocities don’t receive the coverage on social, or any other media.  The idea behind this new dance production is that other atrocities are being perpetrated and the people caught up in them also exist, they can also proclaim “Je suis” (I am.  I exist)

Director-choreographer Aakash Odedra has put together a troupe of dancers whose initial brief was to portray what life is like in present-day Turkey, but the show developed into something less specific yet more universal.  Rather than particulars, we get types.  A man in a long, military coat, moves jerkily, making weird angles.  He is the oppressor, it transpires, preying on the rest of the ensemble, often singling one member out, male or female, and putting his hand over their mouth and dragging them away, like a lion picking off individuals from the herd.  To a soundtrack of sound effects: sirens, feedback, electric humming, the action plays out, becoming more frenetic, more distorted when loud music is added to the mix.

The ensemble, faced with a microphone, fall over each other for their chance to speak out – until the Man comes. Between blackouts, we glimpse striking tableaux, some of them Caravaggio would be proud of.  Imprisoned in narrow strips of light, they shake wildly.  They are wrapped in lengths of cling film, robbing them of individuality, dehumanising them.  To sound effects of the sea, they crawl, washed up on the beach, dead – we have all seen images of refugees who have met this fate, especially their children.

The show is a kaleidoscope of imagery and sound.  Some of it is abstract and you get a general feel for what’s going on.  Much of it is more directly recognisable.  All of it is powerful.

I don’t think ‘exhilarating’ is the word I want here, but I am certainly invigorated in a way by the energy of the performers.  Involving disturbing material translated into movement, this piece is not only a demonstration of what Dance can do but also a reminder of what is going on, what people are doing to each other in the world today.  Gripping, inventive and pertinent, #JeSuis engages us intellectually and emotionally.  Admirable. 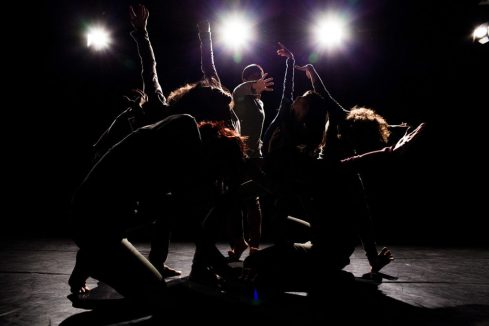 Novelist (Brough & Miller, sci fi, historical fantasy) Theatre critic http://williamstaffordnovelist.wordpress.com/ http://www.amazon.co.uk/-/e/B008AD0YGO and Actor - I can often be found walking the streets of Stratford upon Avon in the guise of the Bard! END_OF_DOCUMENT_TOKEN_TO_BE_REPLACED
This entry was posted on Friday, February 16th, 2018 at 7:57 am and tagged with #JeSuis, Aakash Odedra, Birmingham Hippodrome, Patrick Centre, review and posted in dance, Theatre Review. You can follow any responses to this entry through the RSS 2.0 feed.
« Stuff and Nonsense
See The Elephant »