It’s been forty years since Wolverhampton’s Grand Theatre produced a show of its own but now comes this new production of a time-honoured crowd-pleaser, Mark Herman’s stage adaptation of the much-loved British film.  Set in 1994, ten years after the miners’ strike and the pits are still under threat.  With closure in the air, the men are offered ‘bribes’ in the form of what might seem like generous redundancy pay-outs.  While the women of the community continue to protest and fight, the men fill their non-working hours with drinking and band practice.

Ash Matthews is Shane, our young, part-time narrator, guiding us back to those times.  Matthews, playing much younger than he is, is a likeable presence, capturing Shane’s ebullience and childish preoccupations.  Shane is an innocent trying to make sense of what the grown-ups are up to. 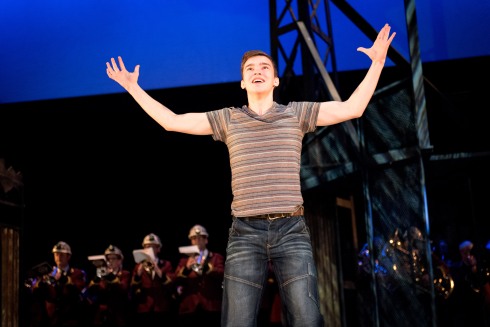 Christopher Connel is Shane’s dad, Phil, who is really struggling to make ends meet.  It’s difficult to put bread on the table when the bailiffs have taken the table.  Connel and Miriam Grace Edwards as wife Sandra, provide most of the emotional content of the show, as their marriage comes under strain, and Phil’s mental health declines.  In a moving and desperate speech, he spits out bitter jokes as he tightens a noose around his neck.  Connel is absolutely compelling.  It’s a dark moment in what is for the most part a story leavened with a lot of down-to-earth Northern humour – most of which comes from Jim and Harry (Greg Yates and Tim Jones) and their wives Rita and Vera (Donna Heaslip and Susie Wilcox).  It’s the womenfolk who talk sense in this piece.

Shane’s grandfather and Phil’s dad, Danny, is also the leader of the colliery band, striving to keep things going and get the band through heats of various competitions.  Jeffrey Holland (from Hi-de-Hi on the telly, and countless pantomime appearances as an exemplary Dame) is a revelation in this dramatic role, balancing the dry humour with passion.  Danny may have coal dust in his lungs but he also has fire in his belly.  A dying man, he is a metaphor for the coal industry, with capitalism as the disease that will kill him.

Eddy Massarella makes a strong impression as the directionless Andy, whose interest is aroused by the return of old flame Gloria (an excellent Clara Darcy) who blows a mean flugelhorn but has a hidden agenda.  Their thwarted love story falls second, however, to scenes that show the blight on the communities by Tory ideology – and it is here that the play retains its relevance.  It is people that matter, Danny declares in an impassioned speech, not making a bob or two – despite the way the Tories carry on to this day.

Director Gareth Tudor Price handles the tonal changes as assuredly as conductor Danny steers the music.  And what music it is!  From the bouncy Floral Dance to the searing Concerto d’Aranjuez and a stirring William Tell Overture, the brass band sound is gorgeous.  The cast is augmented by the City of Wolverhampton Brass Band and it’s a real treat for the ears.

I hope this show heralds a new era of in-house productions for the Grand.  This foul-mouthed but heart-warming story is a superb way to start. 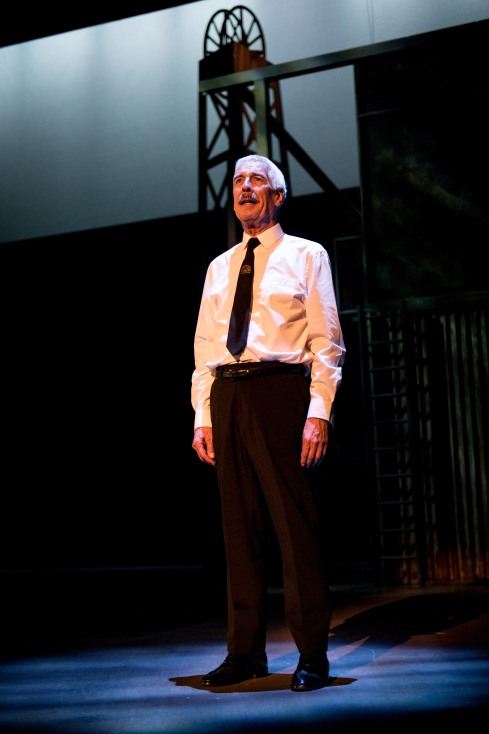