With music by Joseph Zellnik and book and lyrics by David Zellnik, this World War II love story has a timely relevance its creators perhaps did not foresee.  A young man finds a journal in a San Francisco junk shop.  In it he reads the story of journalist Stu (Scott Hunter) who reported for Yank, the army’s in-house magazine during the War – after having met handsome Mitch (Andy Coxon) while undergoing basic training.  The pair strike up a friendship that develops – thanks to long periods without female company – into something more.  Mitch is far from at ease, confused by his love for Stu, and the pair split until events conspire to reunite them and also threaten to finish them off for good.

The pair are so appealing, the playing so tender in contrast with the barrack room banter of the rest of the squad, you can’t help rooting for them.  What these privates do with their privates has to be kept private.  There is also an underlying dread that things will not end happily for these stars-and-stripes-crossed lovers.

Scott Hunter is marvellous as our sensitive and vulnerable narrator, gaining strength in his sense of identity and confidence in his sexuality, while Andy Coxon both looks and sounds bloody gorgeous as hunky heartthrob Mitch (I want one!).

They are supported by a talented and versatile squad, among whom are Kris Marc-Joseph, who adds a touch of humour as Czechowski, Bradley Judge as handsome Italian Rotelli, and Waylon Jacobs impresses as a tough-talking Sarge and as the effeminate, drawling ‘Scarlett’.  Ostensibly the villain of the piece, Lee Dillon-Stuart’s redneck Tennessee is the ugly face (no offence) of homophobia – although, of course, the real baddie is the institutionalised discrimination against gays in the military (and society as a whole).  Sarah-Louise Young appears in all the female roles (there were lesbians in the US army!  Who knew?!) and she gets to knock out some of the show’s finest torch songs.  Chris Kiely is also in great form as photographer Artie, who opens Stu’s eyes (among other things…)

The melodic score is heavily influenced by the likes of Rodgers and Hammerstein, with some 1940s touches for added authenticity –  at times the harmonies are very Andrews Sisters.  The lyrics are witty and sophisticated, and the plot engages us emotionally at first and then intellectually.  We must remember those who fought and/or died to preserve our freedom as well as those who paved the way for civil rights.  How depressing then to live in an age when the Bigot-in-Chief at the White House bans trans people from the armed forces!  Homophobic attacks are on the rise.  The fight for equality and against oppressive shitheads continues.

This beautiful, poignant, funny and rousing show touched my heart, drained my tear ducts and made my hands sore from clapping.  A real pleasure to see (thanks to Chris Cuming’s lively choreography) and to hear (take a bow, MD James Cleeve and his unseen band).  Director James Baker balances tension with humour, tenderness with menace, to engage us with this powerful story.  Small in scale yet immense in scope, Yank! is a strong contender for my favourite show of the year. 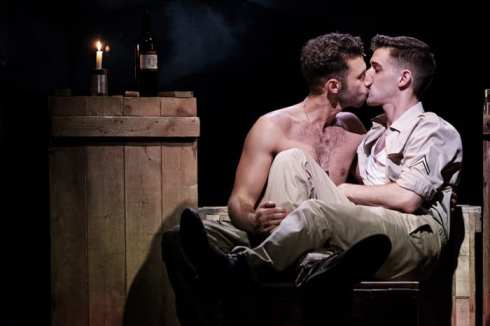