If you’ve got it, flautist

Heritage Opera’s production comes to Stafford Castle for one night only – the grounds are set up for the annual Shakespeare production; this year it’s The Tempest and so there is rather a nautical theme to the design.  Add to this, the reduced size of the orchestra (only seven of them!) and there is a rehearsal feel to this scaled-down sound.  Not that players and singers don’t give their all – and the sound quality is excellent, even with the constant drone of the nearby M6 forever in our ears.

The Tempest set is not a bad fit, given that high priest Sarastro is much like Prospero; the Queen of the Night, Sycorax; and Monostatos is very Caliban-like in this production!  The Three Boys are here replaced by three Spirits – in excellent, imaginative mermaid garb.

Tenor Nicholas Sales is a robust Tamino, the heroic prince and is well-matched with Aimee-Louise Toshney’s princess-in-distress Pamina.  Sarah Helsby Hughes is a strident Queen with a fabulous crown of feathers (I’d been wondering what she does with her daily delivery of birds) while Philip Barton’s Sarastro looks like Matt Berry playing Willy Wonka – but sounds divine.  It’s all about the bass.  The Three Ladies are equally delightful (Heather Heighway, Serenna Wagner, Helen-Anne Gregory) – amazons in straw hats, bringing humour to the action and beauty to the harmonies.  Roger Hanke’s wicked Monostatos is also good fun, a cross between Kermit the Frog and the Creature from the Black Lagoon.  But it is Francis Church’s birdman, Papageno that wins our hearts.  Church makes the best of the sometimes clunky ‘banter’ and his rich baritone is warm and pleasing.

Mozart crammed the show with catchy melodies and beautiful harmonies, with plenty of chances to showcase the main characters.  The Queen hits her top F, Sarastro his bottom one.  Everything that happens in between is aural perfection.  Except when they’re not singing.  The libretto between the musical numbers is hampered by a duff plot (it starts so promisingly with the death of a serpent, and a quest to rescue an abducted princess) riddled with po-faced quasi-masonic blether.  Thank goodness for Francis Church – and for Eleanor Strutt as his intended, Papagena.  Their eventual duet is a joy.

There are moments when the production could do with a bigger sound – the keyboard can’t make up for the absence of brass at key moments – but there are some lovely ideas that add wit to proceedings, like Papageno pushing a pram with an egg in it, and the animals gathering to hear the magical flute are fun if few and far between.

An enjoyable evening of fresh air and Mozart sounding as fresh as ever.  I look forward to more Heritage Opera productions in the future. 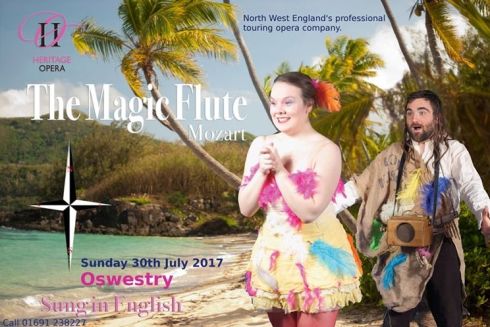