AROUND THE WORLD IN 80 DAYS

First produced in 2013, this eye-popping show gets a well-deserved revival with the added plus that, like its protagonist, it’s going on tour.  The New Vic is its in-the-round spawning ground so I’ll be interested to see how this largely visual show fares in an end-on setting – but that’s a consideration for another time.

Jules Verne’s time-honoured story is, we must remember, a satire of the English by a Frenchman.  His hero, Phileas Fogg is the quintessential eccentric, a stickler and unfailingly polite.  Embodied by the marvellous Andrew Pollard, he is also very funny.  Pollard can express so much with stillness – it’s all in his stature; the turn of the head, the jut of the chin, can say so much.  He is partnered once again by rubber man Michael Hugo, a Roger Rabbit of an actor, pulling off superhuman feats of physical comedy.  Hugo’s Passepartout is an endearing fellow, with a mischievous schoolboy twinkle and a Charlie Chaplin expressiveness.  You can’t help but love him.

They are joined on their journey by dozens of characters, all adeptly and economically presented by a hard-working and skilful team.  Pushpinder Chani charms as Mr Naidu, Simi Egbejumi-David thrills with his acrobatics, and Joey Parsad delights in a range of 21 roles!

The pair are pursued by the misguided, hapless Inspector Fix whose frustration and despair are hilariously portrayed by Dennis Herdman, shouldering most of the tension of the piece as Fix fails repeatedly to get his man.  Matthew Ganley is striking as the gun-toting American general.  Kirsten Foster brings elegance as rescued widow Mrs Aouda – Laura Eason’s adaptation saves the emotional moments for the very end of the tale in a touching, convention-defying proposal scene.

Scenes of the finest physical comedy you will ever see – a punch-up in a temple, a martial arts showdown – are underscored by James Atherton’s miraculous music: all the scenery is in his score, as drama and pacing are coloured by international sounds and rhythms.  It’s as thrilling and effective as any action movie soundtrack and as important a part of the show as any of the cast.  Lis Evans’s design, all maps and bulky suitcases, allows for rapid changes of costume and location, while making us feel included and along for the ride.  And what a ride it is!

Sleight of hand, quick changes, slow motion and a host of other theatrical tricks and conventions are brought to the mix by genius director Theresa Heskins.  No detail is overlooked and it seems to me this time around, the sound effects have been punched up for added comic effect.  The timing is impeccable.  In fact, every aspect of the production is impeccable.  It all runs with the mathematical precision Phileas Fogg espouses, yet it comes across as fresh and funny and full of heart.

Seeing it in 2017 adds a piquancy no one could have foreseen.  Fogg gets his way by throwing large sums of money around – all right, he doesn’t go as far as bribing the DUP but you can see where I’m going with this.  At least it’s his own money, I suppose!  And freedom of movement is not an issue!

On the road for the next seven months, the show is visiting venues up and down the country, so you have no excuse.  If it’s theatrical invention, humour and imagination you’re seeking, this signature production from the New Vic is a safe bet. 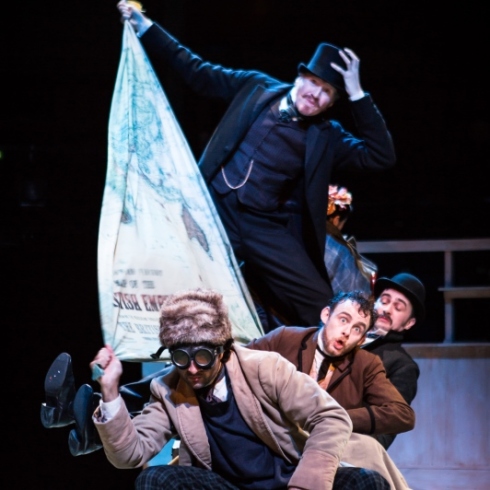 Novelist (Brough & Miller, sci fi, historical fantasy) Theatre critic http://williamstaffordnovelist.wordpress.com/ http://www.amazon.co.uk/-/e/B008AD0YGO and Actor - I can often be found walking the streets of Stratford upon Avon in the guise of the Bard! END_OF_DOCUMENT_TOKEN_TO_BE_REPLACED
This entry was posted on Friday, June 30th, 2017 at 7:09 am and tagged with Andrew Pollard, Around the World in 80 Days, Dennis Herdman, Joey Parsad, Jules Verne, Kirsten Foster, Laura Eason, Lis Evans, Matthew Ganley, Michael Hugo, Pushpinder Chani, review, Simi Egbejumi-David, Theresa Heskins and posted in Theatre Review. You can follow any responses to this entry through the RSS 2.0 feed.
« Austen Powers
If you’ve got it, flautist »

One response to “Let’s Go Round Again”