Come Die With Me

One of the many commendable things about the Bear Pit Theatre Company is they are not shy of staging productions of works that provide challenges for cast and audience members alike.  Ostensibly, Moira Buffini’s 2002 play takes us to somewhere similar to Ayckbourn country, with its premise of a middle-class dinner party attended by monstrous people.  Buffini is less subtle than Ayckbourn; here the savagery is not beneath the surface, the savagery is the surface.  Also, while Ayckbourn’s middle-class monsters are often likable or at least amusing, Buffini doesn’t bother trying to endear us to any of hers.  They’re a pretty rotten bunch and that’s all there is to it.  That’s not to say they’re not fun, and the roles are gifts for the actors.

Our hostess is Paige (an enjoyably arch Charlotte Froud).  She has hired a man off the internet to act as waiter for the evening.  The dinner party is in honour of the success of her husband’s book, success that Paige begrudges.  The book, Beyond Belief, sounds like a dreadful tome bursting with self-help psycho-babble.  Husband Lars (a strong and convincing Tony Homer) behaves like a spoiled brat and moody teen from the off.  He is also pompous and condescending in his bitterness, most of which he directs at his wife.

The sparks fly between Froud and Homer as this embattled couple, although we never really get to the bottom of why they are at loggerheads.  Could it be Lars’s reacquaintance with old flame from college, hippie throwback Wynne (Penelope Sandle-Keynes in a hilarious, detailed characterisation)?  There are cheap laughs at Wynne’s vegetarianism but otherwise Buffini serves up a buffet of barbs that are generally as sharp as poisoned darts.

Abi Deehan is laugh-out-loud funny as the blunt and outspoken Sian while Ben Coventry warms into his role as her husband Hal, providing some of the funniest moments of the night.

The dinner is interrupted by the unexpected arrival of young Mike, a stranger whose van has broken down in the fog.  Nathan Brown is instantly appealing as the cocky interloper who is not all that he claims – it’s a fine contrast with Richard Ball’s stony-faced menace of a Waiter.

Arguments boil over and fizzle out.  Rows build to crescendos and are followed by immediate silence.  This is always effective but it happens at least once too often as director Steve Farr helps his cast ride out the sometimes patchy quality of the script.  Farr injects some lovely touches of comic business and keeps the action far from static – always a danger when the set is dominated by table and chairs.

What’s it all in aid of?  There’s a lot of grandstanding, point-scoring and cod philosophical discourse.  The nature of life is bandied around between the courses of Paige’s ridiculously pretentious and ultimately inedible menu.  It turns out there is nothing like death to make you appreciate life.  The Waiter has other services to offer and the middle-class ritual of the dinner party becomes a darker and more arcane, more primal affair.

With Buffini serving up seafood and the C-word in generous measure,  this is perhaps not to everyone’s taste but there is a great deal to delight in the comic playing of this committed and capable cast. 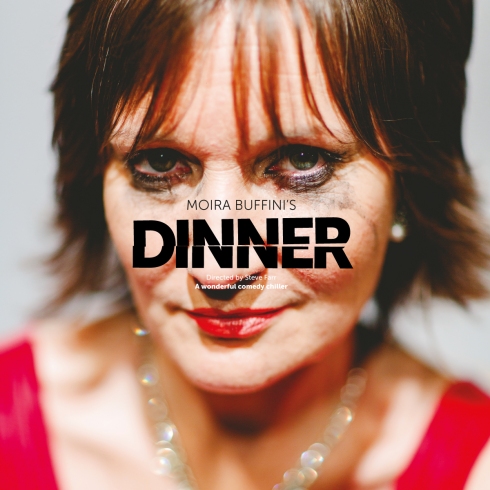 Novelist (Brough & Miller, sci fi, historical fantasy) Theatre critic http://williamstaffordnovelist.wordpress.com/ http://www.amazon.co.uk/-/e/B008AD0YGO and Actor - I can often be found walking the streets of Stratford upon Avon in the guise of the Bard! END_OF_DOCUMENT_TOKEN_TO_BE_REPLACED
This entry was posted on Sunday, June 18th, 2017 at 8:36 am and tagged with Abi Deehan, Bear Pit Theatre, Ben Coventry, Charlotte Froud, Dinner, Moira Buffini, Nathan Brown, Penelope Sandle-Keynes, review, Richard Ball, Steve Farr, Stratford upon Avon, Tony Homer and posted in Review. You can follow any responses to this entry through the RSS 2.0 feed.
« Rome About
Knocking it out of the Park »