Eugene Ionesco’s absurd play from 1954 gets an update in this adaptation from Sean Foley, with topical references like ‘zero hours’ and ‘will of the people’.  It remains, however, curiously old-fashioned.  Like an extended skit, it brings us the story of Amédée, a failed playwright, and his wife Madeleine, a switchboard operator.  It emerges that these two are housebound, imprisoned by a secret they have shared for fifteen years.  The nature of that secret is revealed to us in glimpses: there is a dead body in their bedroom and it is growing, taking over the tiny flat.  The corpse brings with it an infestation of mushrooms and, of course, puts increasing strain on the marriage.  Nothing is fully explained; it is left to us to piece together what sense we can from the crumbs thrown our way.  What is clear is the toll the situation is taking on the couple – the stresses of being full-time carers, the guilt of a murder concealed…

I warm to Trevor Fox as the self-centred, ‘suffering’ writer, while Josie Lawrence’s long-suffering Madeleine makes an impact from the off.  The pair fire barbs at each other and sometimes expose their suffering.  Absurd though the situation may be, the emotions expressed – and the black humour – come across as authentic.  There are hints of a dark world outside their window, adding to the claustrophobia.

Director Roxana Silbert cranks up the pace, adding to the comic delivery.  Ti Green’s set shows a kind of ordered clutter – the ever-growing body is as hilarious as the sprouting mushrooms are sinister.  Dyfan Jones’s sound design complements the weirder moments and Chahine Yavroyan’s lighting washes the action in dramatic hues.

In the final scene, with the secret/corpse out in the open, Amédée finds a great weight has been lifted, and the anchor that has tethered him to his wife and to mundane matters is no longer keeping him down…

Funny, to be sure, intriguing – in places – the production reminds us how much British comedy owes to European influences.  Ionesco was Romanian but his work shows the sparks that lit the flame for the likes of Monty Python, Reeves and Mortimer, and The League of Gentlemen. 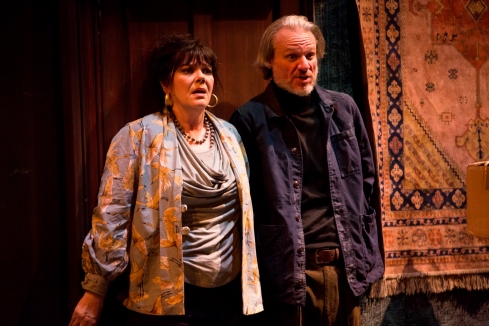 Up against it: Josie Lawrence and Trevor Fox (Photo: Ellie Kurttz)

Novelist (Brough & Miller, sci fi, historical fantasy) Theatre critic http://williamstaffordnovelist.wordpress.com/ http://www.amazon.co.uk/-/e/B008AD0YGO and Actor - I can often be found walking the streets of Stratford upon Avon in the guise of the Bard! END_OF_DOCUMENT_TOKEN_TO_BE_REPLACED
This entry was posted on Wednesday, March 1st, 2017 at 8:06 am and tagged with Amédée, Chahine Yavroyan, Dyfan Jones, Eugene Ionesco, Josie Lawrence, review, Roxana Silbert, Sean Foley, The REP Birmingham, Ti Green, Trevor Fox and posted in Theatre Review. You can follow any responses to this entry through the RSS 2.0 feed.
« Nunny Girl
Valentine’s Day »