Seemingly a permanent fixture for the Regent’s annual pantomime, the dream team double act of local hero Jonathan Wilkes and Welsh actor Christian Patterson are back with one of their best efforts in years.  Appearing as one of the ugly sisters, Patterson has also written the script – a faithful, fast-moving and above all funny version that allows traditional routines, topical references and a rate of one-liners per minute that no other show this year can match. 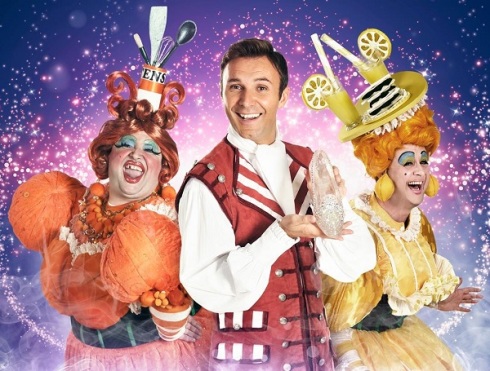 Wilkes, on his home turf, can do no wrong, but he does not rest on his laurels, working tirelessly (This year my name is Buttons) to ensure everyone has a great time.  His first entrance, purportedly in a cage borne by a gorilla, shows a level of self-awareness and mockery that endears him from the off: “I call him Robbie; he carries me everywhere.”  Wilkes has a cheeky stage persona, excellent comic timing and also a good, old-fashioned pop singer’s voice that is a treat to hear.

In the title role is newcomer Finley Guy, a young performer who exudes star quality.  Her Cinders is easily a match for the more seasoned professionals and she is more than able to carry scenes on her own.  Her singing voice is strong and pleasant, making her one of the best I’ve seen in the role.  Similarly, Owen Broughton’s Prince Charming makes a striking impression.  Ian Stroughair’s Dandini is a wildly camp, flamboyant gay man but it is pleasing that his sexuality is not the butt (ha!) of any jokes – he is included and accepted, and that is refreshing.  Michael Geary is fun as a wild-haired Baron Hardup who finally asserts himself, and Hannah Potts brings rhymes and giggles as a bubbly Fairy Cupcake – the transformation of Cinders from rags to ballgown is truly breath-taking and magical, right before our very eyes.

Simon Nehan pairs up with Patterson as the other sister, a villainous pair who also provide much of the laughter.  The comic timing is impeccable – we love to hate them.  Routines like Busy Bee and The 12 Days of Christmas are always hilarious when tackled by such skilled performers – youngsters in the audience who may not have seen them before are just as tickled as those of us who know what’s coming.

The dancers, choreographed by Nikki Wilkes, are excellent; elegantly acrobatic, the boys especially impress.  Clearly, along with Guy and Broughton, students at the Wilkes Academy are of the highest calibre.

A glittering glut of gags and wonder, this Cinderella satisfies on every count.  Wilkes and Patterson have triumphed again! 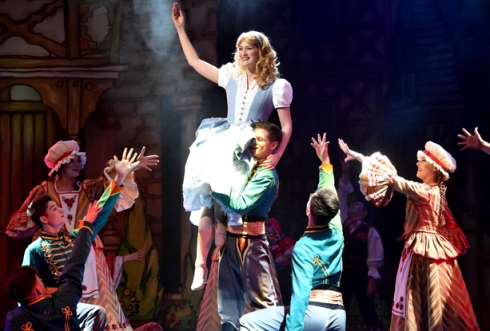