A favourite book of mine, Robert Louis Stevenson’s classic pirate adventure is brought to the stage in this adaptation by Bryony Lavery, which remains on the whole true to the original – in spirit as well as plot – while adding a fresh spin: Jim Lad is a girl.  She behaves like the heroic boy of the original but proudly defies the gender norms of the age – and why not?  There were female pirates aplenty (most notably Ann Bonney and Mary Reade) – the point is it’s the story that matters and not what the characters may or may not have in their breeches.  Similarly, Doctor Livesey is here a woman, which may be stretching a point historically, but levels the playing field somewhat in this male-dominated story.  Director Phillip Breen sets his production on the stage of an old theatre.  Trappings of stage and of ship are equally in evidence.  We are left in no doubt this is storytelling, and in keeping with the season, principal boys are fair game!

Breen and Lavery make no concessions to the family audience.  This is a dangerous, violent world, bloody and frightening – perhaps not suitable for pre-school children but anyone else should find it gripping, tense, and atmospheric.  There is a darkness to the production as much as the tale and it’s all the better for it.

Sarah Middleton is a plucky, heroic Jim with a sweet singing voice and boundless energy.  Michael Hodgson’s sinister Long John Silver stalks around, redolent with menace and treachery.  Does he really care for Jim or is it all part of his nefarious plotting?  The ambiguity keeps us guessing, although Lavery changes Silver’s fate and so robs him and his relationship with Jim of some of its complexity.   Tonderai Munyeyu is great fun as the dunderhead Squire Trelawney, while Sian Howard provides the perfect counterpoint as the level-headed Doctor.  Dan Poole’s Black Dog and Andrew Langtree’s Blind Pew are genuinely scary.  Dave Fishley appears in two broadly contrasting roles: his Billy Bones is marvellously evocative, a swashbuckling, larger-than-life pirate, while his Gray is hilariously the opposite.  Man of the match for me though is Thomas Pickles’s unhinged Ben Gunn, quarrelling with himself in a manner that is funny, alarming and endearing all at the same time.  Marooning someone is surely the pirates’ cruellest punishment.

Dyfan Jones’s compositions enhance the atmosphere.  The songs and shanties sound in keeping with the genre and period, just as Mark Bailey’s design is grubbily theatrical and reminiscent of the glorious illustrations you find in old editions of the novel.  Fight scenes (by Renny Krupinski) are fast and furious, fun when they need to be.  When even the parrot puppet (operated by Suzanne Nixon) can pluck out your eyes, you know this is not some cosy panto – That is not to say there is not humour, there is, but this arises from character rather than the imposition of artificial situations and routines.

A top-notch family show then, perhaps unsuitable for the very young, but if it’s a rollicking, superbly presented adventure you’re after this holiday season, you need to set sail for the REP and get on board with this excellent production. 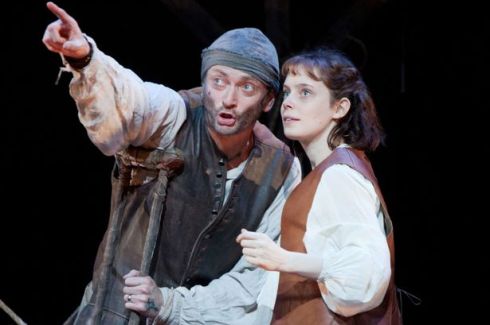