Hans Christian Andersen’s fairy tale is given the Theresa Heskins treatment in this beautiful new version that continues the New Vic’s impeccable tradition of superlative Christmas entertainment.  Heskins’s adaptation improves on the original, in my opinion, by giving the Snow Queen a backstory.  We understand why she is the way she is by seeing how she became the bogeyman, a legend used to frighten children.  The play begins with a sweet courtship scene between the awkward Soren Sorenson (a sweetly clumsy and tongue-tied Oliver Mawdsley) and Karen, the object of his affection.  They skate around the issue – literally: the cast wear inline roller skates to glide around – and come to an understanding, only to have tragedy strike, putting their romance on ice.

Polly Lister gives a chilling performance as the icy, mournful ghost.  Everything about her is striking, the voice especially.  Once again, we are treated to a magnificent score by genius composer James Atherton, and Lister’s voice is the strongest of the night.  Her scenes with Kai (Luke Murphy) are reminiscent of Edmund and the White Witch of Narnia, and there are echoes of other tales, other myths: Summer’s garden, on which Gerda becomes trapped, is like Circe’s island, and the three puzzles Kai must solve remind me of icy Turandot’s riddles with their one-word answers.

Natasha Davidson is an appealing heroine/narrator as the plucky yet bookish Gerda.  Books form the scenic elements here, great slabs like ice floes.  There is a running theme that storybooks are at least as valuable as factual ones.  The Dickensian, Gove-like education meted out by Schoolteacher (Rachael Garnett) is not enough to get children through life and its problems.  Creative thought is vital to our survival.

The splendid leads are supported by equally strong ensemble members.  Matthew Ganley’s Bitzer, for example, and Rachel Dawson’s Robbergirl, help to populate Gerda’s account with engaging characters.  Heskins’s direction includes her trademark ‘distance fighting’, a kind of non-contact violence that is expressive, effective and fun, and there are also stand-out sequences, like the toboggan race, the flight of the Snow Queen, and a stunning backwards scene – Heskins puts the performer at the heart of her stage effects.  She gives the design and tech teams challenges (which they meet, no question) but she is essentially an actors’ director and, above all that, a consummate storyteller.

Ultimately heart-warming, this is the perfect entertainment for a chilly winter’s night.  You leave the theatre feeling cosy and warm.  It’s the simple, uncomplicated things of life that make you feel good, especially at this time of year – I suppose this is the hygge that’s all the rage these days, something that Hans Christian Andersen knew all about. 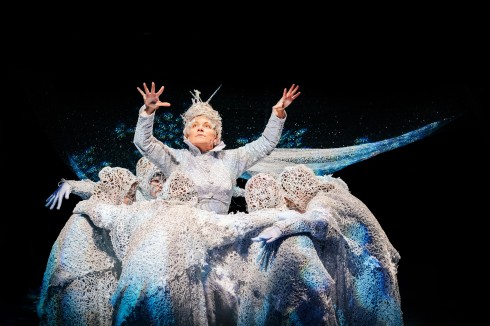