Arch comedy troupe Spymonkey present every onstage death from Shakespeare’s plays in one evening.  A bonkers premise, perhaps, but one which yields surprising results.  The death scenes, taken out of context, afford little possibility of dramatic engagement and so our enjoyment comes from the theatrical forms used throughout the evening.  Everything from puppetry (projected on screen via a live video feed) to contemporary dance is brought in to make for a series of inventive and hilarious scenes.  In fact, it feels like the show is parodying the very medium of theatre, especially its more avant garde aspects.  Certainly the ways Shakespeare is often presented to us come in for a lot of stick.  The through line is the off-stage drama, the relationship problems of the cast members, but that’s not what comes across.  The relentless parade of deaths – silly stabbings and poisonings in abundance – is fun but Shakespeare’s reflections on death and mortality – which tend to come after someone has died – are not given.  We’re keeping things light here – for which I am grateful – but you can’t help thinking of the transience of life, symbolically represented by a rubber fly on a wire!

As ever the performers seem tireless in their versatility.  Aitor Basauri hilariously mangles the blank verse while proving himself an accomplished physical comedian.  Stephan Kreiss brings Teutonic intensity to his clowning.  Petra Massey, a relentlessly funny woman, delights at every turn, while Toby Park adds a touch of melancholy with his marvellously evocative score.

Highlights for me include a joyous Titus Andronicus with a giant mincing machine, the murder of Cinna the poet performed by paper figures on a table top, and Cleopatra’s big production number, complete with dancing asps.  There is darkness here too but whenever the show veers in that direction, the mood is punctured by more silliness.  Director and Adaptor Tim Crouch keeps things tearing along, and the ideas keep coming.  There is cleverness underpinning the madcap mayhem and an anarchistic approach.  Shakespeare stifles creativity, it is claimed – not if this show is anything to go by!

It’s not every night you go to the theatre and see your namesake ‘casually disembowelled’ but there it is: Death Number 4 is one William Stafford in Henry VI Part 2.  And so I experienced a fleeting moment of vicarious fame.  Gutted.

A fabulously hilarious evening of satire and silliness that proves once more the supremacy of Spymonkey’s clowning, informed as it is by an intellectual animus and a celebratory approach to both form and content. 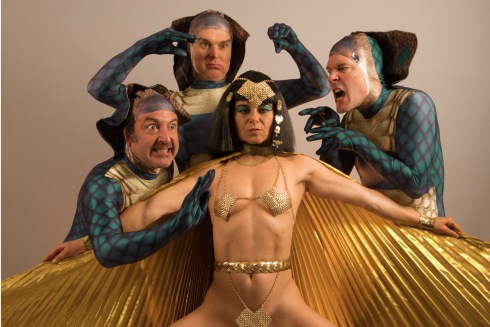 I see you, baby, shaking that asp. Cleopatra (Petra Massey) and her snakes, Aitor Basauri, Stephan Kreiss and Toby Park

Novelist (Brough & Miller, sci fi, historical fantasy) Theatre critic http://williamstaffordnovelist.wordpress.com/ http://www.amazon.co.uk/-/e/B008AD0YGO and Actor - I can often be found walking the streets of Stratford upon Avon in the guise of the Bard! END_OF_DOCUMENT_TOKEN_TO_BE_REPLACED
This entry was posted on Friday, October 7th, 2016 at 8:31 am and tagged with Aitor Basauri, Petra Massey, review, Spymonkey, Stephan Kreiss, The Complete Deaths, Tim Crouch, Toby Park, Warwick Arts Centre, William Shakespeare and posted in Theatre Review. You can follow any responses to this entry through the RSS 2.0 feed.
« Parton is such sweet sorrow
Dramatic Devices »