Stephen King’s story spawned a film, that has proved to be the nation’s favourite, and now this stage adaptation by Owen O’Neill and Dave Johns.  Without the scale of the cinematic version, O’Neill and Johns focus on a select group of inmates, showing us their humanity along with the brutality and privations of the system.  I saw it when it toured last year and now it’s doing the rounds again with a new cast, I am more than happy to see it again.

Red is our narrator – Ben Onwukwe channelling Morgan Freeman in a performance that exudes warmth.  He introduces us to the hotheaded Latino Rico (Adam Henderson Scott), bullies Bogs and Rooster (Jeff Alexander and Sean Croke) and old lag Brooksie (Andrew Boyer in a heartbreaking portrayal of institutionalisation).  Into their midst comes Andy Dufresne, a man wrongfully convicted of the murders of his wife and her lover.  Andy is reserved, decent and kind, but this façade conceals a calculating mind.  Former EastEnders star Paul Nicholls gives us a Dufresne that is markedly contrasted with the larger-than-life characters around him, in a quiet, almost underplayed performance – until you see the intensity beneath the surface.  Dufresne is almost a Messiah figure to the others – and we all know how Messiah’s get treated.

Daniel Stewart impresses as the vicious screw Hadley but the villain of the piece is the god-bothering governor, Warden Stammas – a commanding Jack Ellis, oozing evil.

Director David Esbjornson handles moments of tension well, leavening them with humour, while Chris Davey’s lighting aids and abets Gary McCann’s all-purpose set to create different spaces within the prison.  There is violence and brutality, depicted and implied and the escape, when it happens, is presented symbolically – a beautiful moment.  As with last time, I can’t help noting how sparsely populated this prison is.  Pre-recorded voices go some way to give the impression of hordes of inmates off-stage – perhaps something could be done with local volunteers at each venue to flesh out scenes in the exercise yard, for example… I don’t know.

That aside, the play provides a compelling evening, even if you’ve read the book or seen the film countless times.  And the ending packs a punch right to the feels, as King reminds us that hope is a good thing and sometimes it pays off. 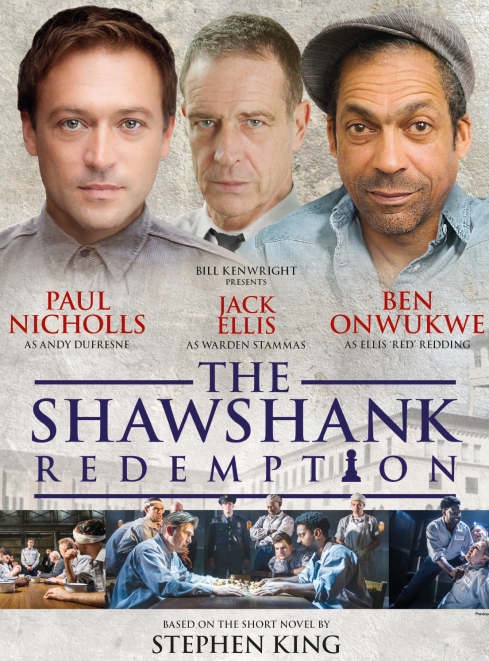